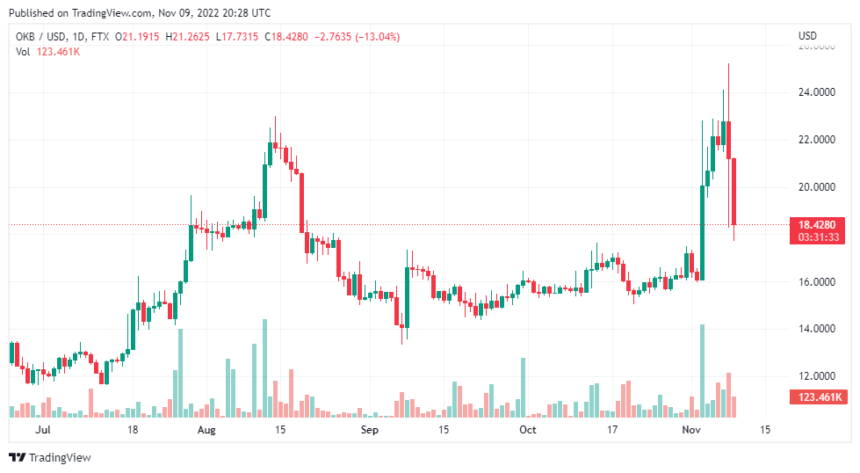 Thanks to the FTX/Alameda saga, the crypto market has taken a nosedive, dragging everyone along. But while the entire market bleeds, OKB, the native token of OKX exchange, has held on to substantial weekly gains. Specifically, the token is trading at $18.61, a 14.57% rise in the last seven days.

However, its daily price hasn’t been pretty. As of writing, OKB has lost over 12%, and there’s no hope of recovery anytime soon. The only other crypto that held on to its weekly gain was Polygon’s MATIC. The token kept over 9% from last week but has since shed all that profit. It has joined the rest of the market in the red zone with a 6% 7-day loss.

Can OKB Continue To Hold, Or Will It Join The Rest Of The Market?

While OKB has held on to substantial gains, it seems unlikely to keep it for long. The token enjoyed a 24% price surge earlier in the week after the exchange opened a shop in the Bahamas. At the time, the token solidified itself as the third-highest gainer of the week.

However, the FTX liquidity crisis news proved a stronger opponent to the token’s bullish run. The token has remained strong even though its trading volume and market cap have dropped in the last 24 hours. However, if OKB continues to hold above $18, then it will be able to maintain its current position. But if the token drops below this level, it could find itself joining the rest of the market. If this happens, it won’t be easy to recover.

As per the charts, OKB still looks like it can continue holding above $18. Looking at its price movement against BTC and ETH, we can see that OKB has gained much over both these assets. Plus, technical indicators on TradingView suggest that the token still has strong momentum.

The CoinMarketCap community isn’t so bullish about OKB’s prospects. Based on the platform’s price prediction tool, CMC traders forecast a further drop in OKB’s price by the end of December. Specifically, they see OKB dropping to an average of $16 before the year runs out. This is an 11% drop from its current price. The last time OKB was trading at $16 was earlier this month. So, falling back to that range may not be new for the token.

In fact, the token has always found support below that range since September this year. Specifically, after its September 8 spike, it picked up a…