The Dollar Is at a 20-Year High. That’s Bad News for Bitcoin 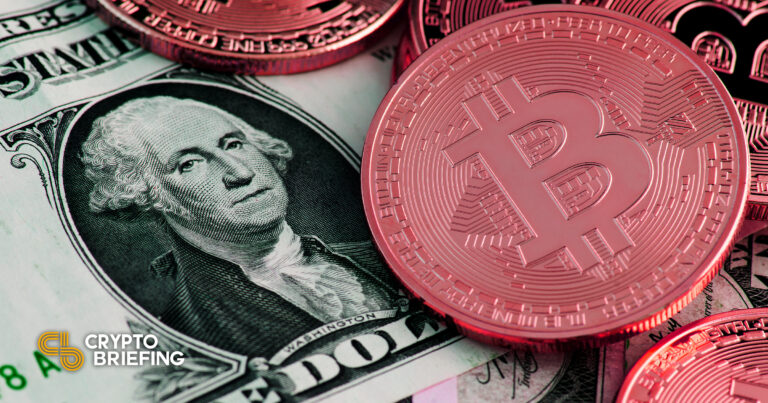 The dollar index has jumped to 20-year highs above 112 thanks to the Federal Reserve’s economic tightening policy.
While the dollar is soaring, Bitcoin and other cryptocurrencies are struggling due to the Fed’s interest rate hikes.
While the dollar is currently rising against other currencies, a decline in inflation or an end to the European energy crisis could revive interest in risk assets.

Bitcoin and the broader crypto market are struggling to stay above their June lows due to renewed strength from the dollar.

BTC Down as DXY Rallies

Bitcoin is battling against the dollar—and losing.

The crypto market has been hit particularly hard in recent weeks due to renewed strength of the greenback. In August, Bitcoin enjoyed a brief rally to $25,200 as the dollar retraced from its July highs. However, since then, crypto assets have been crushed under the weight of the rising dollar. Bitcoin now appears pinned below $20,000 while the dollar continues to climb, trading at around $18,810 at press time.

Much of the dollar’s positive price action can be traced back to rising interest rates from the Federal Reserve. As the Fed raises rates to fight inflation, it tightens U.S. dollar liquidity. This should help bring inflation back down by making it more expensive to borrow money, thereby reducing demand. However, one side effect of such a policy is that it makes the dollar a much more attractive investment.

The tightening of dollar liquidity means market participants have less cash to invest in riskier assets like cryptocurrencies and stocks. In turn, this reduces demand, causing asset prices to fall. The Federal Reserve has also stopped buying U.S. Treasury bonds as part of its tightening policy. This has caused yields on U.S. bonds to rise, which helps the dollar’s value increase as more investors buy these bonds.

It’s not just crypto and stocks suffering from a soaring U.S. dollar. As the Fed started raising rates to combat inflation before other nations and has been increasingly aggressive in the size of its hikes, liquidity from the global economy is flowing into U.S. dollars at a record pace.

This effect was coined the “Dollar Milkshake Theory” by Brent Johnson, CEO of Santiago Capital. Johnson’s theory posits that the dollar will suck up liquidity from other currencies and countries worldwide whenever the Fed stops printing due to its place as the world’s reserve currency.

Since the U.S. reserve bank turned off its money printer and started tightening liquidity in March, the Dollar Milkshake Theory appears to be playing out. The euro, the currency that receives the heaviest weighting against the dollar in the DXY, has plummeted throughout 2022, recently hitting a new 20-year low of 0.9780 against the dollar.

Other world currencies aren’t faring much better. The Japanese yen tumbled to a 24-year low Thursday, prompting government intervention to help shore up the declining currency. While the European Central Bank has responded to the weakening euro by raising interest rates, the Bank of Japan has so far refused to do so. This is because it is actively engaged in Yield Curve Control, keeping interest rates at -0.1% while buying an unlimited amount of 10-year government bonds in order to maintain the yield at a target of 0.25%.

As things stand, it’s looking increasingly difficult for assets such as cryptocurrencies to find strength amid a deteriorating global economy. However, there are several signs investors can look out for that could indicate an end to the dollar’s dominance and its knock-on effects. If next month’s Consumer Price Index data registers a notable drop, investors could return to riskier assets in the hope that the Fed will temper its interest rate hikes. Elsewhere, a resolution to the current Russo-Ukrainian War could help alleviate the global energy crisis by reducing the cost of oil and gas. Still, for the time being, the dollar’s rise isn’t showing any signs of slowing—and that could keep crypto trapped near its yearly lows.

Disclosure: At the time of writing this piece, the author owned ETH, BTC, and several other cryptocurrencies.