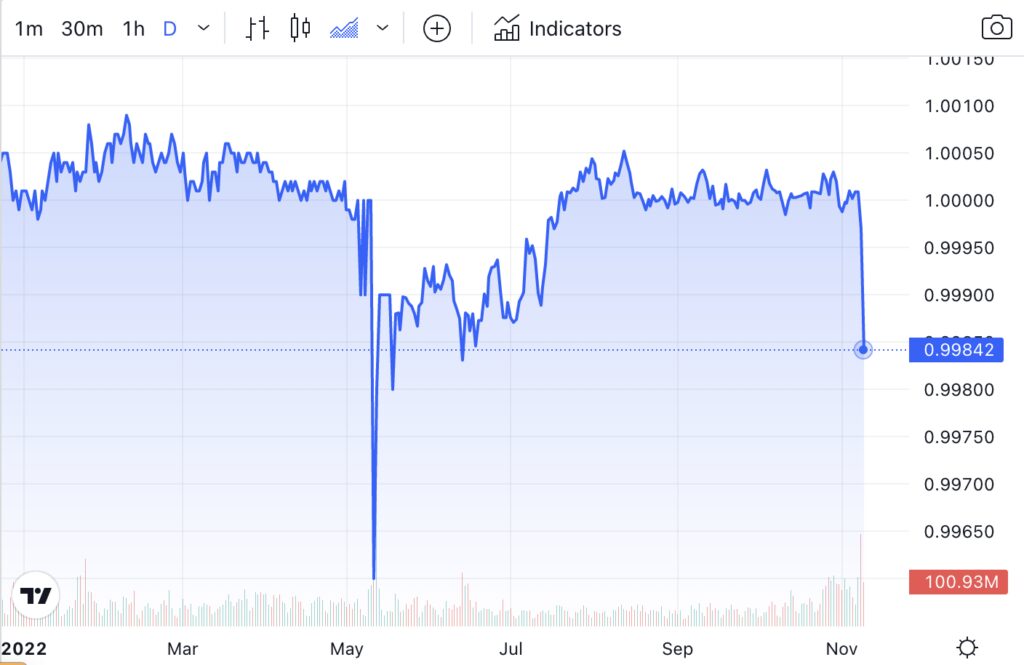 The ongoing turmoil in the crypto markets is now impacting stablecoins as USDT, USDC, DAI, and GUSD all drop to around $0.998. The price is not indicative of a death spiral, as seen by Terra Luna in May, but it does showcase heightened fear within the market. The only significant stablecoin not currently affected by the market volatility is Binance USD which has retained its dollar peg throughout.

Tether USDT fell to its lowest level since June. While USDT regained its peg following Terra UST’s collapse, it dropped as low as $0.995 in May. As of press time, USDT has fallen below its Dollar peg to $0.998 across all exchanges, as shown in the chart below.

Bitfinex and Tether CTO Paolo Ardoino tweeted that the USDT peg across major exchanges remained within 10bp parity calling out a “glitch” in Coingecko data that suggested the stablecoin had fallen by up to 3%.

Seeing a price discrepancy of USDt on coingecko. While USDt trades close to parity (+-10bps), coingecko reports 3% from parity.
Looks like a glitch to me.
Binance, Bitfinex, Coinbase are all trading within 10bps from parity.

Circle’s USDC has also dropped to a similar level, trading at $0.998, a price not seen since May. The fluctuation is not yet at a level to be cause for serious alarm among stablecoin holders. However, it clearly indicates that the market forces are now starting to impact stablecoins.

During market uncertainty, stablecoins often spike above their Dollar parity as investors sell crypto for stablecoins. However, when market prices decline at the same time as stablecoins drop below the Dollar peg, it indicates investors are fleeing to fiat.

Data analyzed from Glassnode showcases the impact on major stablecoins. DAI appears to have been affected the worst, dropping close to 1% to $0.99. However, all stablecoins are currently within a widely accepted range removing the fear of another serious de-pegging incident.

Binance’s BUSD has not deviated from a range of $0.999 to $1.001 throughout the current volatility. The exchange volume for Binance outweighs any of its competitors by a wide margin. Binance has a daily trading volume of $51 billion, while the next closest competitor, Coinbase, traded just $5.7 billion over the same period. In fact, Binance has had a higher spot trading volume over the past 24 hours than the entire CoinMarketCap top 20 exchanges combined.

Get an Edge on the Crypto Market…