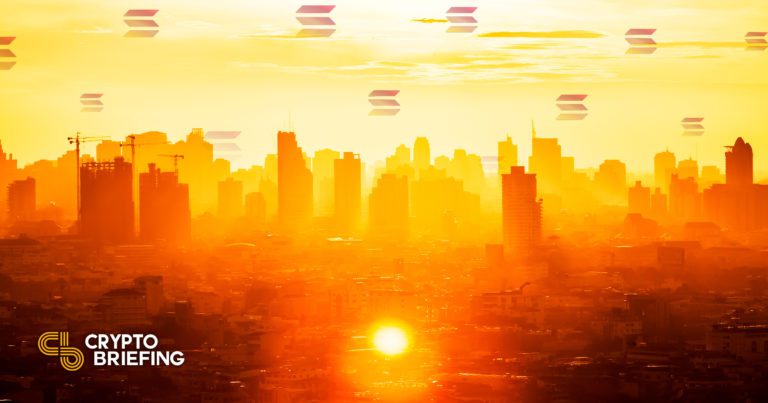 Solana made a number of big announcements at Breakpoint this weekend, but SOL failed to react.
Solana has faced many challenges over crypto winter, including ongoing outages and a decline in DeFi activity.
While Solana has issues to overcome and competition to face, it remains one of crypto’s strongest and most promising ecosystems.

Solana is one of several Layer 1 networks to have suffered in the enduring crypto winter. But sunny skies could return, Chris Williams writes.

Solana Makes a Splash at Breakpoint

It was a big weekend for Solana as the Layer 1 network hosted the 2022 edition of its Breakpoint conference. As for SOL? Not so much.

The thousands of Solana fans that flocked to Lisbon for the Layer 1 blockchain’s flagship event were treated to several big announcements throughout the conference. Arguably the biggest one came Saturday when Google Cloud revealed that it was running a Solana validator and would start indexing Solana data via its BigQuery product in early 2023. Google Cloud will also make Solana available via its Blockchain Node Engine to help users run their own nodes in the cloud. Per CoinGecko data, SOL immediately rallied double digits past $38 as the announcement broke, but the momentum didn’t last. It’s since cooled by 5.5%, trading at around $34 today.

In a different approach to other blockchains such as Ethereum, the various engineers working in the Solana ecosystem have focused on building products for the mass market. An example of such a product is its Saga phone, which aims to be the world’s first Web3-ready smartphone. Solana announced at Breakpoint that it would ship the product to developers as soon as next month.

USDC issuer Circle also appeared at Breakpoint, announcing that it would make its Euro Coin offering available on Solana in the first half of 2023. Euro Coin is already live on Ethereum. Circle also revealed that its forthcoming cross-chain protocol would support Solana.

Arguably GameFi’s most anticipated title, Star Atlas developers shared an early demo for the game at Breakpoint. Solana’s high-speed capabilities (it claims to process 65,000 transactions per second) could make it a prime candidate for the Web3 gaming space, but as there are no leading titles available to play today, it’s unclear how much progress teams have made—and whether Solana will become a hub for the niche. Games typically take years to develop, so it could be some time until Solana’s GameFi ecosystem picks up.

The State of Solana DeFi

Like much of the crypto space, Solana has had a rocky year, not least in its DeFi ecosystem.

Solana topped $10 billion in total value locked as SOL neared $260 in November 2021, around the time of the inaugural edition of Breakpoint.

However, Solana DeFi has taken a beating this year thanks to crashing market prices, liquidity taking flight to other networks, and brutal token unlock schedules diluting the value of some of the ecosystem’s stars of 2021. According to Defi Llama data, today the total value locked on Solana is around $968 million, which is slightly less than Avalanche’s $1.31 billion and a fraction of Ethereum’s $32.29 billion. If the numbers don’t drastically change in the future, Solana may find that it thrives in other areas. However, it’s also worth noting that the total value locked has remained more stable in SOL terms this year, down around 54% from its June 2022 peak to roughly 31.3 million SOL.

Notably, Solana now trails the Ethereum Layer 2 network Arbitrum in total value locked terms, and only slightly leads ahead of Optimism. If Layer 2 continues to grow at its current pace, Solana could find that it’s not only in competition with other Layer 1 networks for liquidity.

Both the Mango Markets and Solend exploits were possible due to low liquidity levels on their platforms, which made it easier for whales to manipulate their markets to take out outsized loans. While Solana protocols are coming up with solutions to such problems, the network’s DeFi ecosystem could continue to run into issues as long as liquidity is low.

While Solana DeFi is down, by far the biggest criticism leveled at the network is over its repeated outages. Solana has suffered from hours-long downtimes on multiple occasions over the past two years, most notably in September 2021 when it went down for 18 hours. Solana has been hit by four major outages in 2022, with the most recent downtime last month occurring due to a misconfigured node.

Though outages have been a persistent problem for the network, Solana Labs CEO Anatoly Yakovenko has said that a forthcoming upgrade will prevent such incidents in the future. If Solana can overcome the problem as he promises, the network should be in a much better position by the next crypto market boom.

While Solana DeFi may be in a slump, the same can’t be said for the network’s NFT ecosystem.

With the second biggest NFT ecosystem behind Ethereum, Solana has built a fast-growing community of so-called “JPEG enthusiasts.” This year, collections like DeGods and y00ts have taken the NFT scene by storm, trading at thousands of dollars on the secondary market despite adverse market conditions.

Solana has also attracted many big names from the digital art world. At Breakpoint, Metaplex announced that it would launch “immersive 3D NFTs” from Beeple on Solana, taking a notable branch out from Ethereum. pplpleasr, another leading artist in the NFT space, has also previously launched Solana NFTs. Where much of the mainstream attention over non-fungible digital collectibles has been on Ethereum, NFT natives have seen that activity is growing on its strongest competitor network. The next NFT bull cycle could look different to the last one now that Solana’s NFT community and infrastructure have gained so much pace throughout the bear market.

Solana also seems to be aware of its standing in the GameFi world due to its high-speed, low-cost capabilities. Breakpoint featured an entire day dedicated to the buzzy sector, which was where Star Atlas and other teams showed off their latest progress to a packed room of would-be Web3 gamers.

What’s the Future for Solana?

While the network has challenges to overcome, it’s abundantly clear that many positive developments are coming from the network. The various announcements made at Breakpoint prove that talented companies, artists, and projects are taking a keen interest in the Solana network despite the difficulties it has faced.

It’s also worth pointing out that Solana and SOL aren’t the only victims of crypto winter. While SOL is down around 86.9% from its peak after outperforming in 2021, many other Layer 1 networks have suffered similar losses. DeFi has also taken a beating across the board, with Ethereum coming out strongest. Historically, Ethereum’s competitors—sometimes dubbed “Ethereum Killers”—have seen activity wane and their tokens die off in bear markets, but none of them has had as many positive developments as Solana has done over recent months.

Perhaps the greatest hurdle ahead for the network lies in its competition. The new Layer 1 networks Aptos and Sui, both developed by former Meta employees, have been compared to Solana owing to their promise of high speeds, and both projects have raised nine-figure war chests this year. Aptos, which claims it can process 100,000 transactions per second through its Move programming language, launched with a token airdrop last month and anticipation for its growth is high. Sui is also believed to be preparing its own airdrop. Capital is merciless in crypto; if these projects successfully capture the space’s attention, they could end up outpacing Solana on the next market rally.

As with other leaders of what’s become known as the “alternative Layer 1” space, Solana will also soon have competition in the form of Layer 2 networks. Arbitrum and Optimism’s rapid growth this year has proven that liquidity will flood to Layer 2 if Ethereum succeeds, and many other Layer 2 projects are yet to launch in earnest.

Still, Solana has one of crypto’s most active and fastest-growing ecosystems with several promising developments on the horizon. Despite its issues, it’s clear that the network isn’t going anywhere anytime soon. As for SOL, while the utility token may not be moving today, that’s not uncommon for crypto bear markets—however positive the news cycle looks. Once sentiment flips to bullish, though, there’s good reason to believe that SOL could see the benefit.