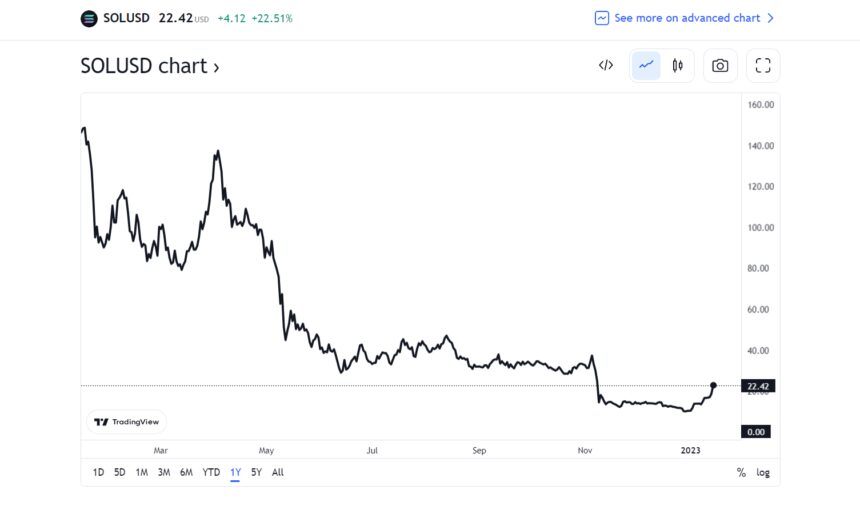 Following the heavy market crash late last year, the crypto landscape has been on a steady path to recovery, with the altcoins leading the way. Solana(SOL) is one of these many altcoins, and it has kicked off the weekend with an explosive start.

According to data by CoinGecko, SOL has gained 40% in the last 24 hours, sparking excitement across the entire Solana ecosystem. Although it remains unknown how long the altcoin can sustain such momentum, these significant price gains indicate an increasing positive sentiment from investors.

Interestingly, as a result of its price rally, Solana (SOL) even surpassed Polygon (MATIC) in market cap, becoming the 10th biggest cryptocurrency. However, this was only for a short time, as the Ethereum-based token has since reclaimed its position.

Solana Has Been In The News Lately

Prior to today’s development, Solana has been one of the altcoins in the headlines mainly due to its impressive price action. On Dec. 30, 2022, Ethereum founder Vitalik Buterin tweeted a statement expressing support for Solana after the token’s value plummeted as much as 20% at the end of last year due to the FTX crisis.

Asides from the tweet from Buterin, another propelling force behind Solana’s price actions were the massive price movements of the Solana-based meme coin BONK.

Early this year, BONK, a new meme coin launched on December 25, gained over 2000% in the first week of the year, becoming the biggest meme coin in the Solana ecosystem.

Although BONK soon crashed 50% following its tremendous bullish run, there is still much optimism surrounding the meme coin as many investors expect it could return to the previous high price levels in the coming weeks.

Price Prediction For Solana In 2023

According to top price prediction site, Wallet Investor, the price of SOL could fall as low as $5.875 in 2024,…