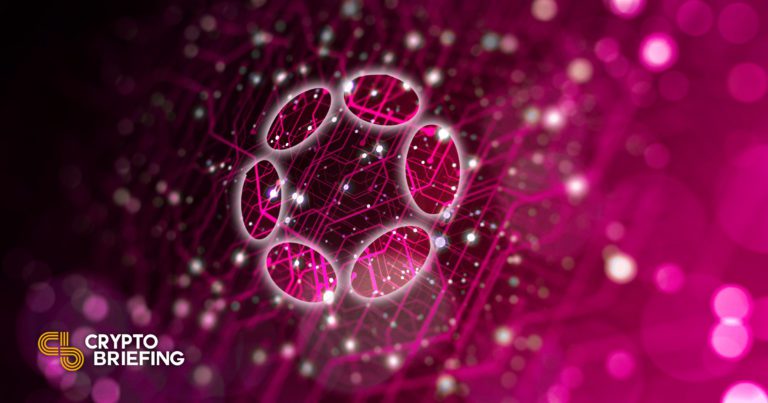 Polkadot has completed one of its most anticipated milestones: releasing the “cross-consensus” messaging format XCM and becoming a fully interoperable multi-chain ecosystem.

After passing community vote, v0.9.19 has been enacted on Polkadot. This upgrade included a batch call upgrading Polkadot’s runtime to enable parachain-to-parachain messaging over XCM and upgrading #Statemint to include minting assets (like NFTs) and teleports. pic.twitter.com/uqIB5di2Q1

Polkadot, the scalable, heterogeneous, multi-chain ecosystem developed by Parity Technologies, announced today the launch of XCM—a “Cross-Consensus Messaging” format allowing communication between the network’s various parachains. According to a Wednesday press release, XCM’s launch means that the network has achieved its goal of becoming “a fully interoperable multi-chain ecosystem.”

Polkadot is a blockchain network hoping to achieve interoperability by hosting a web of interconnected, modular, and independent blockchains called parachains. A separate network dubbed the Relay Chain sits at its core, which serves as the foundational security layer for its parachains. XCM, otherwise known as the Cross-Consensus Messaging format, is a language that enables communication between parachains, smart contracts, and Substrate pallets that give blockchains custom functionalities. Commenting on XCM’s release, Astar Chief Technical Officer Hoon Kim said:

“I see traditional smart contracts on isolated Layer 1 chains like setting up shop in a kingdom surrounded by walls. Then we have bridges which are like a trading route that first connected nations from nations. Now we have XCM, which is like a free trade agreement for blockchains. This is the natural future.”

Full cross-chain interoperability has been the Polkadot ecosystem‘s most highly-anticipated feature. It is the essence of Polkadot’s vision and has been on the roadmap since the project entered development…