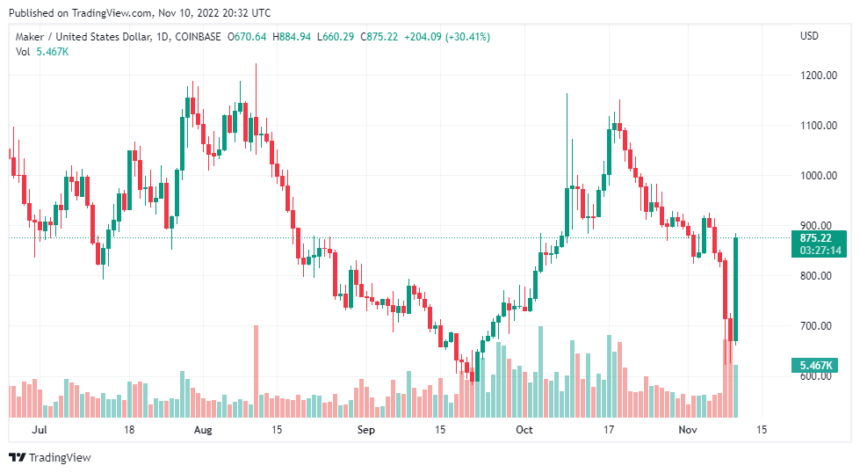 MKR, the native token of the Maker Protocol, has recorded substantial gains despite the most recent market downturn. After news of FTX’s liquidity crisis rocked the crypto market, several coins have struggled to bag daily gains to no avail. However, MakerDAO’s governance token has experienced an impressive surge today. Specifically, MKR trades at $873 press time, gaining over 26% on the day.

Despite the huge jump in the day, Maker still hasn’t recovered its weekly losses. However, if its bullish trend continues, it might fully recover in a short time.

After a steep drop and sell-off over the last day, bulls have succeeded in turning around the Maker’s (MKR) negative trend. MKR’s price increased by $177.40, or 13.64 percent, to $840 during this recovery. The main catalyst for the price surge is an increase in 1-day trading activities and market cap. Specifically, MKR saw a 27.26% increase in its market capitalization and a 15.37% surge in trading volume.

MKR’s gains were most felt in the DeFi sector of the Maker Protocol. According to a Token Terminal Intern on Twitter, the DeFi sector lost around 20% of its total value locked in the last 24 hours. This is unsurprising and expected due to FTX’s controversy. However, despite the downturn, Maker recorded an increase in its TVL. Precisely, Maker saw a TVL increase of 28% over the same period.

This increase results from the recent surge in borrowing activities on the platform. As per the thread, Token Terminal Intern noted that the top-three lending protocols, including Maker, facilitated $27B worth of trading volume. The account mentioned that the increase resulted from traders fleeing centralized exchanges due to the FTX collapse.

What The Charts Say About MKR’s Movement

The intersection of the upper and lower Bollinger Bands is located at 780 and 615, respectively. The widening of the bands indicates a rise in trading activity, which may lead to a price breakthrough.

Since the market has broken out above the upper range, bulls appear to be in control, and this upward trend might continue for a while. The RSI is currently at 57.45, which has been quite constant over the past few hours. As a result, the MKR market shows signs of balance between buyers and sellers, suggesting the positive trend will continue.

The MACD line is…