Ethereum Layer 2 Soars to $5B in Locked Value. Here’s Why 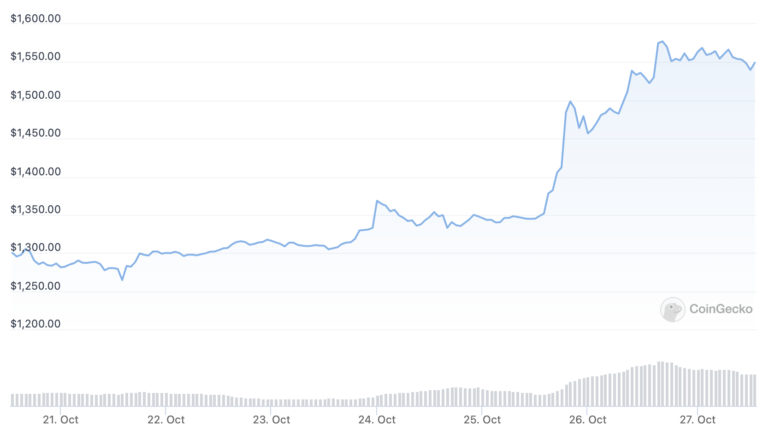 Arbitrum currently holds more than half of all the total value locked on Layer 2.

Ethereum’s Layer 2 ecosystem is on the rise.

The jump in locked value comes amid a period of bullish momentum in the cryptocurrency market. Amid the bounce, ETH has gained almost 20% in market value over the past week, currently trading at about $1,540. ETH is widely used as Ethereum’s Layer 2 base asset, so its rise goes some way to explaining the increase in the total value locked.

Arbitrum One and Optimism, two Optimistic Rollup solutions that collectively account for over 80% of the value locked on Layer 2, have respectively seen rises of 9.3% and 10.3% in total locked value. Arbitrum One currently holds around $2.59 billion, over half of the locked value on Layer 2.

However, while the ETH upswing has helped Layer 2’s locked value surge to a new all-time high, it’s not the only factor behind the rise. This week is a major one for the Layer 2 ecosystem as zkSync is set to launch its new product, zkSync 2.0, on mainnet Friday. As a result, capital has flooded over to the zkSync protocol, up around 19% this week. zkSync is a ZK-Rollup solution and has so far seen slower growth than its leading Optimistic Rollup counterparts, but the project is hoping that tomorrow’s launch will give the network a boost.

ZK-Rollups use zero-knowledge proofs to bundle transactions and reduce the amount of data required to validate transactions on Ethereum mainnet, in turn offering faster transaction speeds and cheaper fees. Unlike Optimistic Rollups, they do not require a lengthy dispute period to maintain security (it takes about a week to send funds from Arbitrum One back to Ethereum mainnet, for example). Though Optimistic Rollups are currently leading Ethereum’s Layer 2 race,…