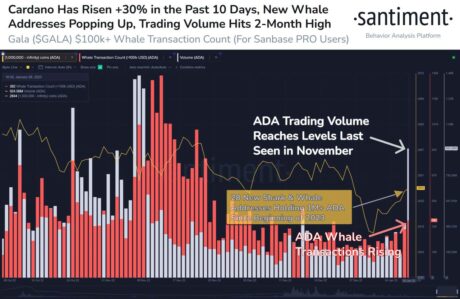 Though Cardano (ADA) has been gaining traction for a while, the recent accumulated momentum has garnered active buys as data shows the rising accumulation of ADA. ADA’s movement to the upside since last December totaled 30%, as new whales have been reported to be holding at least 1 million ADA tokens in these past few weeks amid the mini bull run.

Regardless of the bear market, Cardano has proved to be a token worth holding both with its utilities and the recent positive news that includes the rapidly growing DeFi and NFT ecosystem of the Cardano Blockchain.

Late last year, ADA gained traction and purchases from whales. According to crypto analytics platform Santiment, ADA has jumped an impressive 30% in its value since December 30th.

Notably, ADA has been down by nearly 90% from its all-time high of $3.09. This recent accumulation resulting in a rally in its price could be what the token needs to recover. In the last 7 days alone, ADA has been up by 25%.

Alongside the whole crypto market, ADA has taken advantage of the mini bull run and followed suit in the right direction. Among the largest crypto by market cap, ADA is still the only one making significantly higher highs, following Solana (SOL), which had already gained 43% in the past 7 days.

While there is still no apparent reason behind the recent active accumulation of ADA, it’s worth noting that the blockchain itself has got big announcements it’s working on, which could be an enticing catalyst enough to attract large investors to buy up the digital asset.

On the main stage at the CardanoSummit2022, the CEO of COTI, Shahaf Bar-Geffen, announced that Cardano is set to Launch an over-collateralized stablecoin which will go live on Mainnet later this month.

Historically, the launch of stablecoins always ends up being a good enough catalyst or an appealing use case that often results in a significant surge in inflows as it causes on-ramps and off-ramps of…