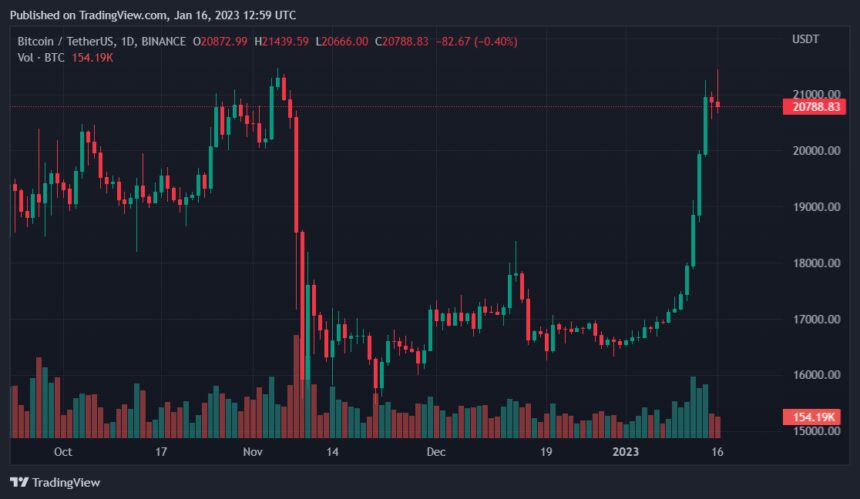 The cryptocurrency market continues to show signs of improvement. Bitcoin, the number one cryptocurrency, has continued its price upswing as its breaks above its 200-day moving average. In addition, the market generally has recovered, as crypto enthusiasts believe the crypto winter is close to its end.

The  U.S. Consumer Price Index (CPI) report has given Bitcoin and other cryptocurrency leverage. The consumer price index is an important metric that measures the monthly changes in prices paid by United State consumers. The CPI values also measure economic inflation and deflation using statistics from customer expenditures.

Events over time have shown that macroeconomic factors such as inflation and deflation affect Bitcoin and other cryptocurrencies. So when the CPI is high, it means that inflation is also high leading to a spike in interest rates that plummet crypto prices.

So, with this new data, a Bitcoin rally is now possible as other altcoins, such as Ethereum, recorded improved figures.

On Saturday, January 14, Bitcoin’s price surpassed the $21,000 level on the back of declining inflation figures. BTC gained 7.5% on that day and peaked at $21,299. Santiment, an analytic platform, states that the number of Bitcoin addresses holding between 100-1000 BTC is increasing rapidly, probably pushing BTC.

Santiment also revealed that more than 416 addresses hold 100-1000 BTC. It is an increase of 3.04% in eight weeks. The whales’ influence in the market is critical as they control prices due to the size of their portfolios. In addition, the price increases caused by the whales have a wider-reaching effect on other cryptocurrencies in the market.

Since the turn of the year, BTC has recorded gains for twelve consecutive days. Santiment reports that it recorded these gains over the last eight weeks. Bitcoin short-term traders recorded their most profitable spending day on January 14 since April 2022. According to Glassnode, the BTC trading volume has increased in the past months.