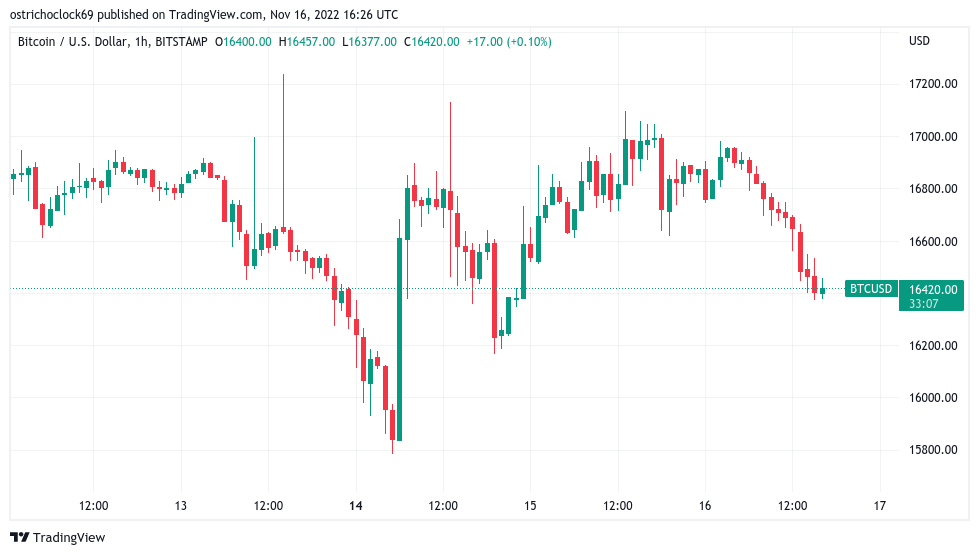 Bitcoin (BTC) fell to intraday lows after the Nov. 16 Wall Street open as the FTX scandal appeared to claim another victim.

Data from Cointelegraph Markets Pro and TradingView showed BTC/USD trading around $16,400 at the time of writing.

Downside had entered again for the pair amid news that Genesis Global Capital, the crypto lending arm of Genesis Trading, had paused withdrawals over liquidity problems.

In a series of tweets on the day, Digital Currency Group (DCG), the parent company which counts Genesis Trading among its subsidiaries, attributed the decision directly to the FTX debacle.

“This decision was made in response to the extreme market dislocation and loss of industry confidence caused by the FTX implosion.”

DCG added that its other operations were unaffected, these including Grayscale and its Grayscale Bitcoin Trust (GBTC), the industry’s largest institutional investment vehicle.

“The impact lies with the lending business at Genesis and does not affect Genesis’s trading or custody businesses,” the thread concluded.

“Importantly, this temporary action has no impact on the business operations of DCG and our other wholly owned subsidiaries.”

GBTC traded at a near record discount to the Bitcoin spot price on the day, having broken below -40% in November, data from on-chain monitoring resource Coinglass confirmed. Industry commentators were concerned about potential contagion spreading to the largest BTC holder.

“The assets underlying $GBTC and all Grayscale products remain safe and secure, held in segregated wallets in deep cold storage by our custodian Coinbase,” Grayscale confirmed on the day.

The limited scope of the issues at Genesis thus allowed Bitcoin to avoid significant fresh losses. As Cointelegraph reported, multiple other industry businesses had already signaled that FTX exposure was placing them under financial strain.

Genesis itself meanwhile said that its problems had begun thanks to the Terra LUNA debacle and associated insolvency of trading firm, Three Arrows Capital (3AC).