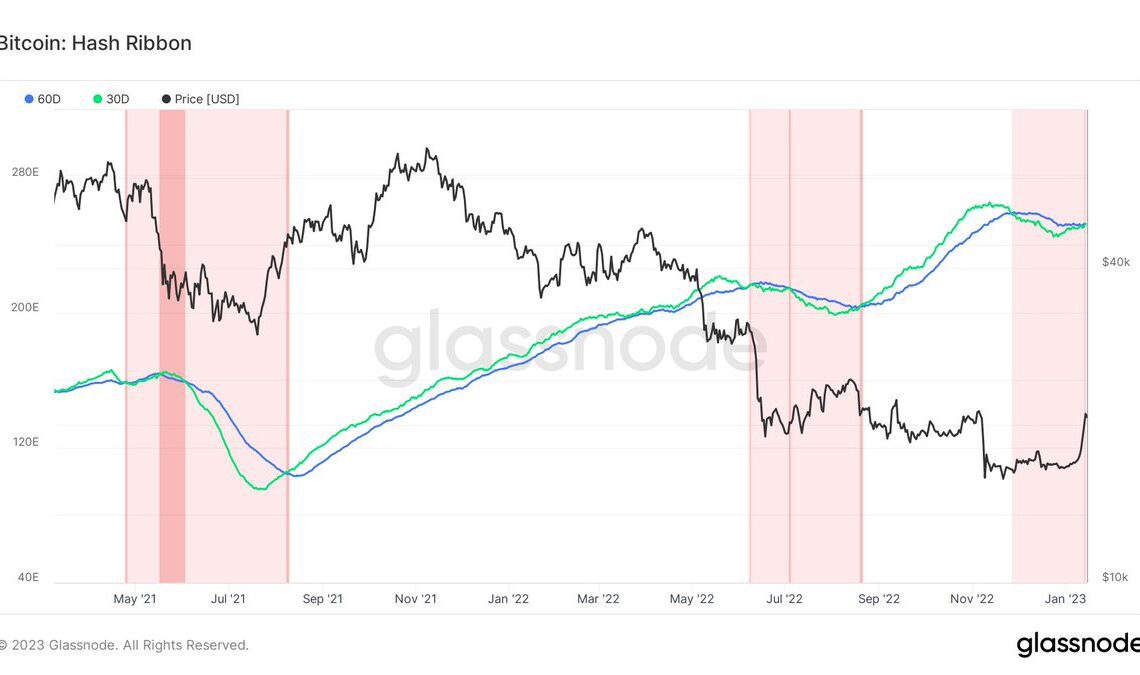 The collapse of FTX triggered a historic event for the Bitcoin market. In late November, the hash ribbons indicator signaled the beginning of a second wave of Bitcoin miner capitulation within one cycle. As NewsBTC reported, the hash rate dropped dramatically while some of the largest miners reported bankruptcy and dumped their BTC holdings on the market.

However, this poor state of the Bitcoin mining industry and the associated pressure on the Bitcoin price may have come to an end. As the net position change of miners already indicated since the beginning of January, the selling pressure has decreased significantly.

For the first time in over four months, miners had been hodling BTC instead of dumping the majority of their coins. The termination of the strong selling pressure from Bitcoin miners is now also confirmed by the hash ribbon indicator.

As the chart below shows, the hash bands are displaying a bullish cross. “Miners have stopped selling and are now plugging in machines at a sufficient rate to declare this period of miner capitulation over,” stated Will Clemente from Reflexivity Research.

What Does This Mean For Bitcoin?

The hash ribbon is a market indicator that assumes BTC tends to hit a bottom when miners capitulate. Currently, the hash ribbons indicate that the worst of the miner capitulation is over as the 30-day MA of the hash rate crossed over the 60d MA.

In other words: When the hash ribbons indicate a cross, it signifies a paradigm shift. This is historically an extremely good buying opportunity. As Charles Edwards once said, it may be the strongest buy signal of all.

This also confirms the thesis that miners are increasingly plugging their miners back into the network. The hashrate of the entire network is now 269.02 EH/s, also approaching its highs again. Thus, miners are clearly signaling their bullish sentiment.

The creator of the hash…