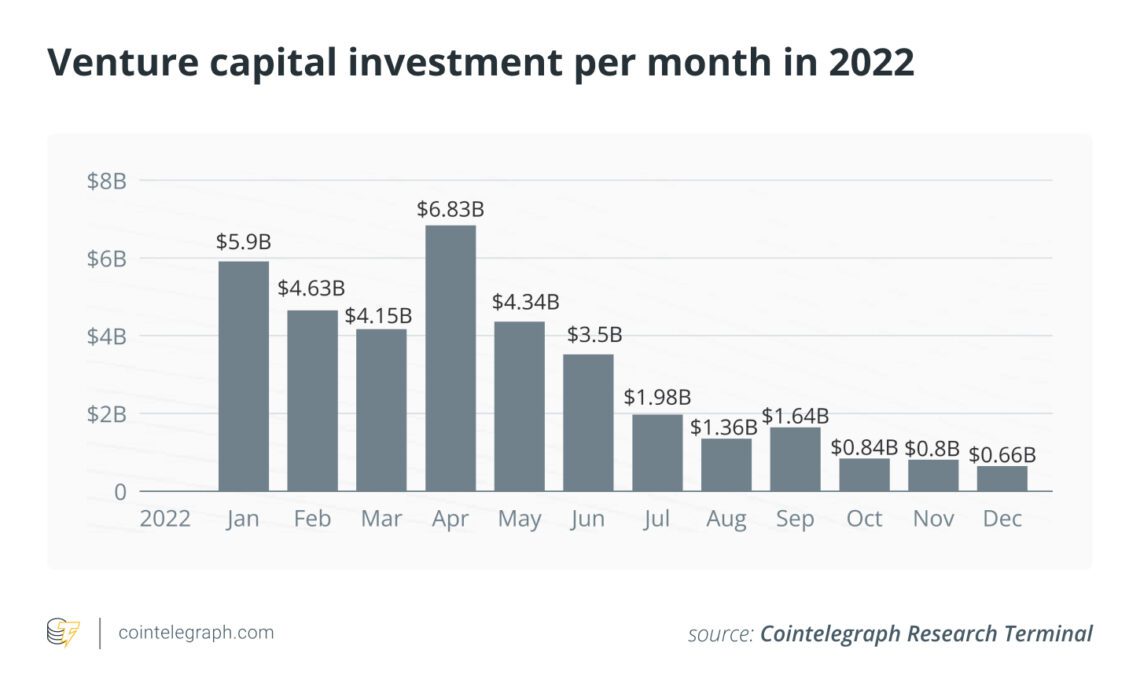 Cointelegraph Research has analyzed all the deals and trends from venture capital in the blockchain industry during the fourth quarter of 2022. The second half of 2022 saw a dramatic decline in capital inflows across all five major sectors of the blockchain industry: decentralized finance (DeFi), centralized finance (CeFi), nonfungible tokens (NFTs), infrastructure and Web3. The first half of 2022 brought in just under $30 billion of investment, while the second half only saw $7.3 billion — a dramatic plunge.

As the crypto industry moves into 2023, Cointelegraph Research has looked at the data from its Venture Capital Database, which contains comprehensive details on deals, mergers and acquisition activity, investors, crypto companies, funds and more. Using this database, Cointelegraph Research crunches the numbers to find the most important trends in the industry. Its latest report explores Q4 2022 and how it relates to the broader picture of 2018 through 2022.

Download the full report here, complete with charts and infographics.

After the fallout from the collapse of Terra in the first part of 2022, the blockchain industry could not seem to attract venture capital back into investing in this industry as it did in 2021 and the start of 2022. There was $30.5 billion invested in 2021, and 2022 was on pace to double that — right up until April 2022, when everything began to decline. September saw a brief bounce in capital investment, but it did not sustain as the year ended, with the last three months staying below $1 billion in investments.

The number of deals also dropped considerably, down to just 182 in Q4. While previous months saw large deals that were always over the $100 million mark, there were only five in Q4 above $100 million. The focus for those 182 deals stayed within the Web3 sector — which comprises subcategories like metaverse, GameFi, identification and a host of others — followed by infrastructure and DeFi. NFTs and CeFi were the least popular in terms of the number of deals, but just looking at those numbers can be misleading.

The most active and least active sectors tie for investment

Web3 was the most popular sector of the blockchain industry for investment, with 616 individual deals, while CeFi was the least popular, with 201 deals. Yet, both sectors brought in a total of $9.2 billion in 2022. The average deal for Web3 was $15.4 billion, compared with CeFi’s average of $46.6 million….