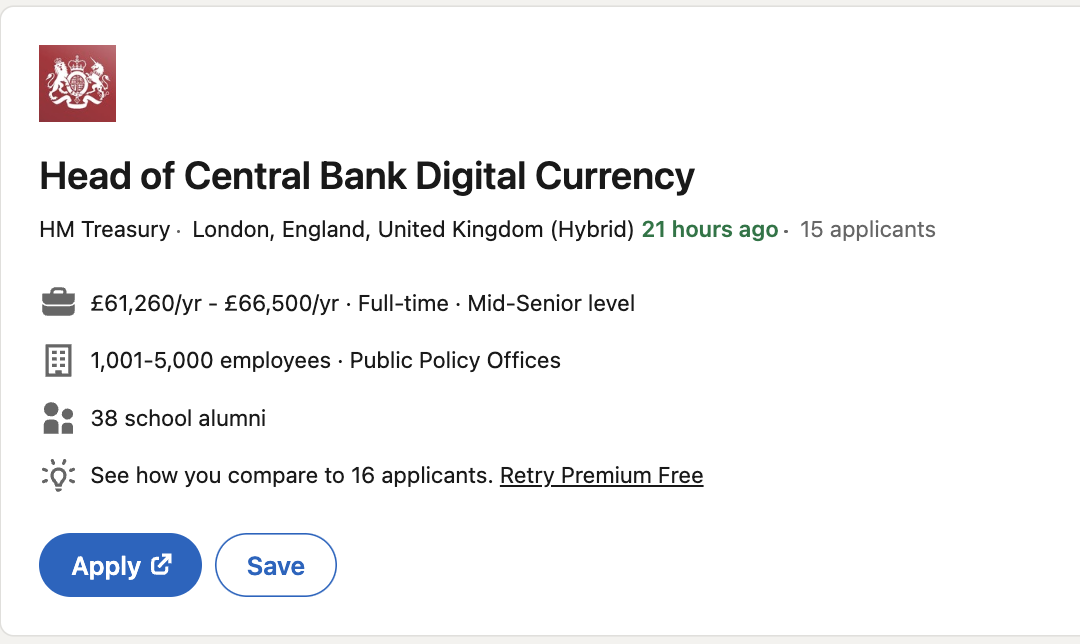 The UK Government’s economic and finance ministry, HM Treasury, is recruiting for a Head of central bank digital currency (CBDC) to lead the development of a digital pound. The work is described as “Important, complex, and cross-cutting” and will “require extensive engagement across and beyond the HM Treasury.”

According to the Linkedin post, the Treasury and the Bank of England are working together through the CBDC Taskforce to explore the case for a digital pound. The role of the Head of CBDC may bring the UK government closer to its aim of rolling out a CBDC.

Danny Scott, CEO of a UK-based Bitcoin (BTC) company, CoinCorner, told Cointelegraph that a CBDC could be missing the “Actual real-world use and purpose–which is what we often see.”

“For those that have been in the industry for a cycle or two, we’ve seen the hypes come and go, altcoins, blockchain, distributed ledger, ICOs, DeFi, NFTs. You see large companies come along and jump on the latest hype to avoid looking like they’re falling behind, it falls under R&D and exploratory for most, which is perfectly understandable.”

Scott, who has been working and building in the Bitcoin space for over a decade, explained that sometimes the public could misinterpret the research and development projects in the crypto space and perhaps confuse them with useful real-world solutions.

“A CBDC (digital pound) doesn’t fall far from this, many countries around the world are exploring this and trying to understand the benefits of this over the current system, fair enough, this will happen.”

Indeed the move towards a digital pound matches the trend among central banks worldwide to explore the potential of CBDCs. In Europe, the European Central Bank (ECB) has been actively studying the future of a digital euro, and several countries, including Sweden and Denmark, are also exploring their own digital currencies.

CBDCs claim to offer a number of benefits, including improved financial inclusion, reduced costs for businesses and consumers, and increased security and efficiency in the payment system.

However, El Salvador banked as much as 70% of its unbanked population with the introduction of Bitcoin as legal tender, while countries such as Nigeria, Ghana and Kenya can now receive money from around the world to a mobile phone or Bitcoin exchange account.

Moreover, there are potential…