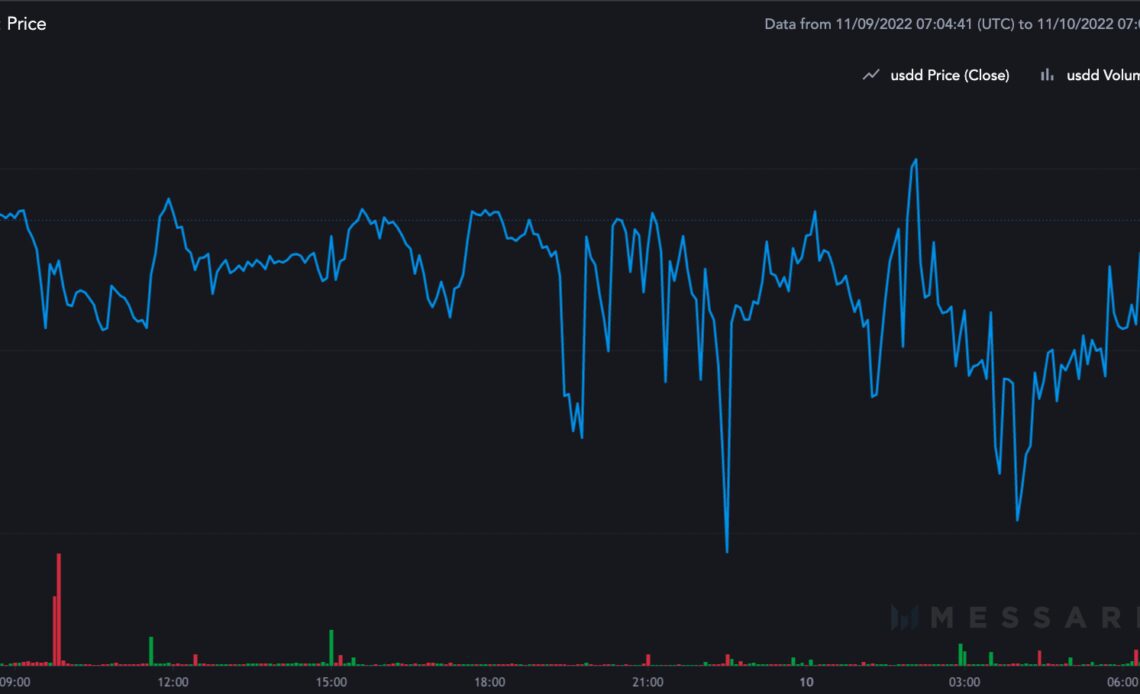 In April 2022, the Tron network launched USDD, a token pegged to the U.S. dollar, as an “over-collateralized stablecoin,” meaning its likelihood of slipping below $1 should be lower due to excessive reserves backing its valuation.

But it was not enough to keep USDD’s price anchored to $1 on Nov. 8 when some whales dumped over 11 million USDD tokens to seek exposure in rival stablecoins Tether (USDT) and USD Coin (USDC). A day later, USDD’s price fell to as low as $0.96, followed by a modest recovery to $0.98 on Nov. 10.

The selling pressure was visible more broadly in the USDD liquidity pool on Curve’s decentralized finance protocol. As of Nov. 10, the pool was heavily imbalanced, holding nearly 82.50% in USDD and the rest in USDT, USDC, and DAI stablecoins.

I think probably Alemeda just sold their USDD to cover the liquidity of ftx exchange. The pool currently is back with a healthy rate. pic.twitter.com/oSIzUNqE0Z

USDD is issued by Tron DAO Reserve (TDR), which also serves as the custodian of its collateral. TDR is primarily responsible for selling the collateral to maintain USDD’s peg in the event of a sell-side shock.

In theory, USDD appears sufficiently backed by a $2-billion pool of crypto collateral in the form of Bitcoin (BTC), Tron (TRX), and USDC, with the reserves reportedly outweighing the stablecoin supply by over 283%.

But there’s a catch.

Currently, almost all the stablecoin collateral worth in TDR’s reserve wallets are staked and earning yields in JustLend, the largest lending protocol in the Tron ecosystem by total-value-locked (TVL). Meanwhile, 99% of TRX collateral is locked inside a “staking governance” contract.

TDR also appears to be incorrectly including burnt TRX worth over $725 million as collateral. Overall, that leaves the DAO with about $600 million worth of USDC and $236 million worth of BTC in its liquefiable reserves.

In other words, an almost 113% collateral ratio versus the 283% boasted.