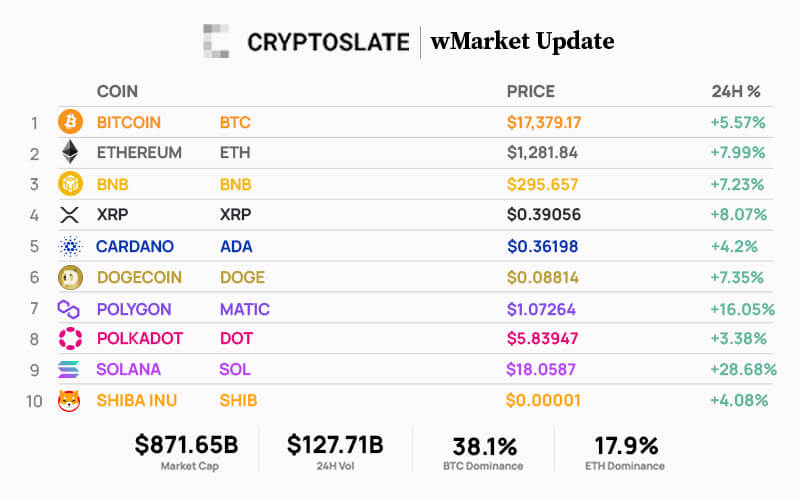 The crypto market experienced a positive bounce as the top 10 cryptocurrencies all posted significant gains. Solana printed the highest green candle, rising by 28% over the reporting period. BTC and ETH recorded increases of 5.57% and 7.99%, respectively.

After days of consecutive poor performance, Bitcoin price briefly traded above the $18,000 barrier after US authorities released October’s Consumer Price Index (CPI) data. The asset bottomed at $16,367 over the reporting period.

The second-largest digital asset posted a giant green candle around 09:00 UTC on Nov. 10, pushing it above $1,200. The asset traded sideways for the rest of the day.

PEOPLE is the day’s biggest gainer, growing by $69.19% to $0.03 as of press time. The DAO movement token is one of the few outliers in the current market situation, rising 30% over the last seven days. Its market cap stood at $166.85 million.

FTT recorded gains for the first time this week, rising by over 35% in the last 24 hours to $3.47. The embattled network has enabled withdrawals for users in Turkey and Japan. Its market cap stood at $461.64 million.

Like FTT, SOL posted a positive price performance over the last 24 hours, increasing by 30% over the reporting period to $17.64. The suspension of the token unlock to a later date fueled its run. Its market cap stood at $6.44 billion.

The native token of the decentralized exchange DYDX continued its upward movement, gaining 30.57% over the last 24 hours and trading at $1.96 as of press time. Its market cap stood at $128.59 million.