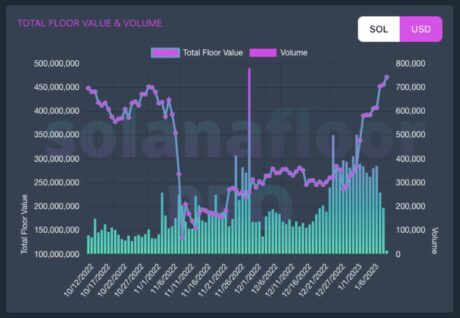 With the recent hype and increase in meme coins on Solana over the past weeks, the network has gained a significant amount of momentum, pushing it to an uptick both in on-chain activity and trading volume.

Solana has begun to show recovery signs from the FTX scandal following a recent spike in momentum. Even the network’s native token SOL joined in on the momentum and reached a two-month high amid the ubiquitous rally in the global crypto market.

Solana Recovering Back To Pre-FTX Levels

So far, SOL’s on-chain activity shows signs of recovery after the recent plummet. According to analytics platform Messari, transaction volumes and active accounts of the Solana network have skyrocketed back to pre-FTX levels.

The analytics platform tweeted earlier today that SOL might not be dead, as the fundamentals show otherwise. Adding that, the number of active accounts has spiked to roughly 240,000, returning back to October levels.

“While tweets and meme coins may have been the cause for recent activity, it is difficult to pinpoint the FTX collapse by looking at these metrics,” Messari tweeted.

Not only has Messari proved the recovering traction in SOL’s volume, but block explorer Solscan has also shown some favorable data depicting the network revival. According to Solscan, the Solana network throughput is around 3,735 transactions per second (TPS), and so far, there have been an accumulated 132 billion transactions on the network.

On Wednesday, Solana’s NFT insights page, SolanaFloor, reported that the total floor value of its NFT ecosystem is worth more than $470 million — a relatively high amount compared to the cumulative total floor value seen in recent weeks.

With positive data like these indicating Solana’s recovery, the motivation for more increase in volume could be what the network needs to recover fully. Coin98Analytics, recently showed that SOL is fourth in terms of active addresses over the past week, rising to 3.16 million.

Overall, the spike in Solana volume seems to be…