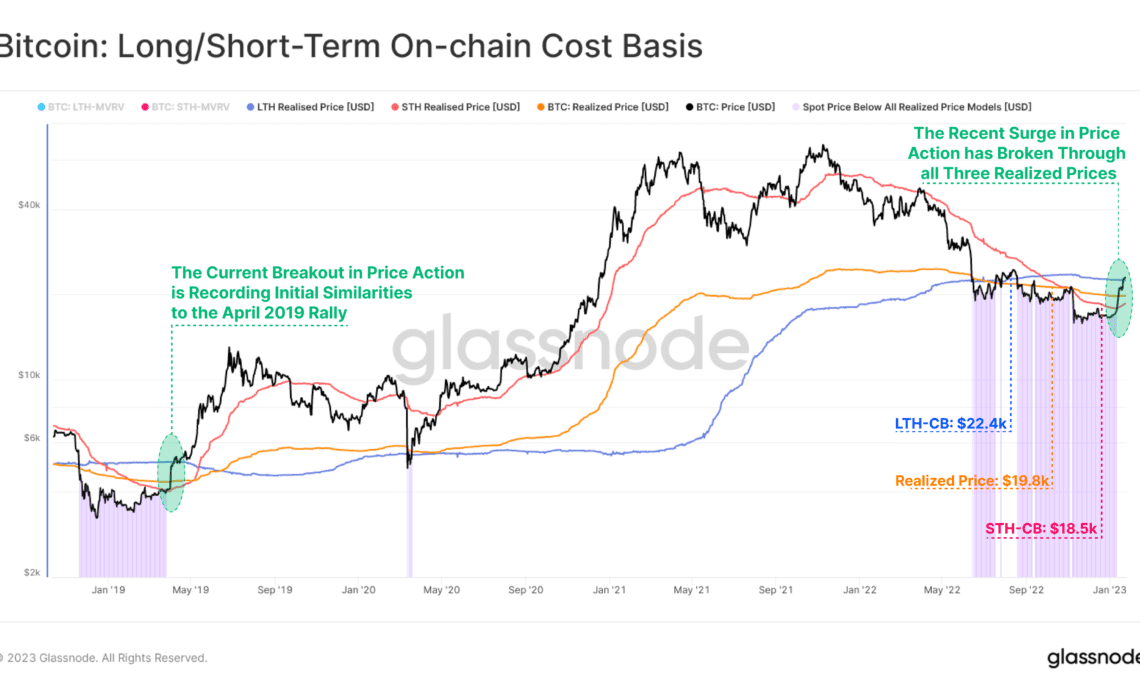 On-chain data shows Bitcoin has broken above these three key levels in a manner reminiscent of the rally in April 2019.

According to data from the on-chain analytics firm Glassnode, BTC has broken above the three investor cost-basis levels for the first time since the COVID-19 crash and the 2018-2019 bear market. The relevant indicator here is the “realized price,” to understand the concept of the “realized cap” it needs to be looked at first.

The realized cap is a capitalization model for Bitcoin that assumes that each coin in the circulating supply has its real value as the price at which it was last moved rather than the current BTC price (which the normal market cap uses for its calculation).

Now, from the realized cap, a “realized price” can be obtained by dividing the metric by the total number of coins in circulation. Since the realized cap accounted for the prices at which investors bought their coins (which is to say, their cost basis), the realized price can be thought of as the average acquisition price in the market.

This means that if the normal price of Bitcoin dips below this indicator, the average holder can be assumed to have entered a state of loss. While this realized price is the average cost basis for the entire market, the metric can also be defined for only specific groups of investors.

The BTC market can be divided into two primary cohorts: short-term holders (STHs) and long-term holders (LTHs). Investors who bought their coins within the last 155 days fall into the STHs, while those holding them since before that threshold are included in the LTHs.

Here is a chart that shows the trend in the Bitcoin realized price for the entire market, as well as for these two holder groups separately, over the last few years:

As the above graph shows, Bitcoin had broken above the STH cost basis and the entire market’s realized price earlier in the latest rally, suggesting that the average STH and the overall average investor was back in profit.

In the most recent continuation to the rally, the crypto has now surged above the LTH cost basis of $22,400. This means that the average investor in every segment is now in the green.

The last time Bitcoin displayed a breakout above all these levels was following the black swan COVID-19 crash, which had briefly taken the coin below…