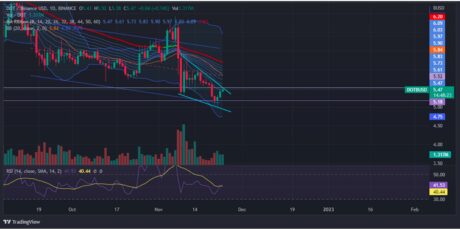 With the use of relationships with parachains, Polkadot will be able to expand its ecosystem’s capabilities and reach new heights. Moonbeam Network and its subsidiary, Moon River, have joined forces with Bifrost recently.

There’s hope for Polkadot, and here’s a quick article at how the crypto has been faring: The DOT’s price went up because of some major changes on the chain. However, according to the indicators, the negative outlook remains intact.

Based on a recent tweet, the integrations have not only enabled liquid staking for GLMR and MOVR tokens, but they have also caused a dramatic increase in developer engagement within the ecosystem.

This, as this tweet attests, is what propelled Polkadot into the ranks of the most active blockchains.

We’re happy to announce that $vGLMR & $vMOVR liquid staking is Live on Bifrost!🌈

Thanks to the @Polkadot #HRMP channel and the yield-bearing vToken derivatives, @MoonbeamNetwork & @MoonriverNW community can enjoy increased token liquidity and rewards:https://t.co/15mSRH8BpR
🧵

During this same time period, sales of NFTs grew, indicating progress for Polkadot in this arena as well. CoinMarketCap reports an 8 percent gain in the price of DOT in the last 24 hours as a result of these events. However, can DOT keep up this pace?

While there is little doubt that ecosystem trends are encouraging, multiple signs suggest that investors may be getting carried away. We may deduce that the current price action is not a solid rally for DOT from the fact that MFI numbers are falling.

The Liquid Staking for $GLMR and $MOVR Tokens. 🪙
Watch the video to learn more: ⬇️https://t.co/PNDCVBWJ1f pic.twitter.com/Hr3Zk6tyX1

The token was previously rejected at $5.43, which was the price level breached by bears in the preceding days. Not to add the bearish crossover of the RSI indicators. A Bollinger Band compression zone is also enhancing this rejection.

The present support at $5.18 is a little fragile, as it may let bears to enter the market and wipe all today’s gains for DOT. The EMA ribbon is also blinking red, indicating that shorting DOT is significantly more lucrative than going long.