Polkadot Records New Achievements In Dev’t Activity, But Why Is DOT Price Down? 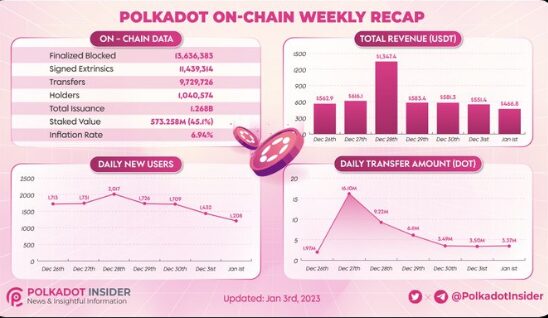 Polkadot (DOT) has ushered in the first week of 2023 on a strong note, rising 8% in the last seven days, data from Coingecko shows, Wednesday.

The ecosystem itself has been very bullish recently, following the trend of the crypto market. According to Polkadot Insider, who posted an on-chain update of the ecosystem, Polkadot is registering new users on-chain, peaking on January 6th at 2,126 new users.

The ecosystem also saw gradual increases in revenue. Compared to December’s final week– which includes January 1st, in line with Polkadot Insider’s chart– average revenues on the last week of the month was at $671.8 million, but the average rose this week to $709.3 million. 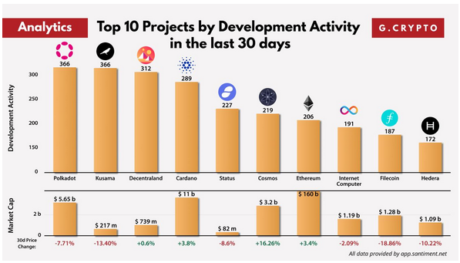 This can be seen in the development activity on-chain which skyrocketed with the start of the year. Polkadot also scored major partnerships with Japan phone operator NTT Docomo and video game company Square Enix, further strengthening the ecosystem’s Web3 infrastructure.

But positive revenues, booming dev activity, and major tie-ups could have no big effect on DOT’s price, despite its latest weekly ascent. The token has not broken its sluggish pace which started in May last year. This downtrend, if not altered this year, will eventually lead the token to retest its support at $4.

As of writing, the token is changing hands at $4.8 which is not a far cry from the $5 resistance that halted any bullish run for DOT. According to crypto analyst Market Mobster, the rally that DOT has experienced is just what they call a “sucker rallys.”

Be careful of these types of ‘suckers rallys’

As much as I love @Polkadot I’m not adding to my bag here, monster downtrend needs to break structure to give me more confidence

99% of coins look like this when you zoom out. You should have bought it weeks ago pic.twitter.com/4cPzh0xfVZ

Other analysts, however, are bullish that…