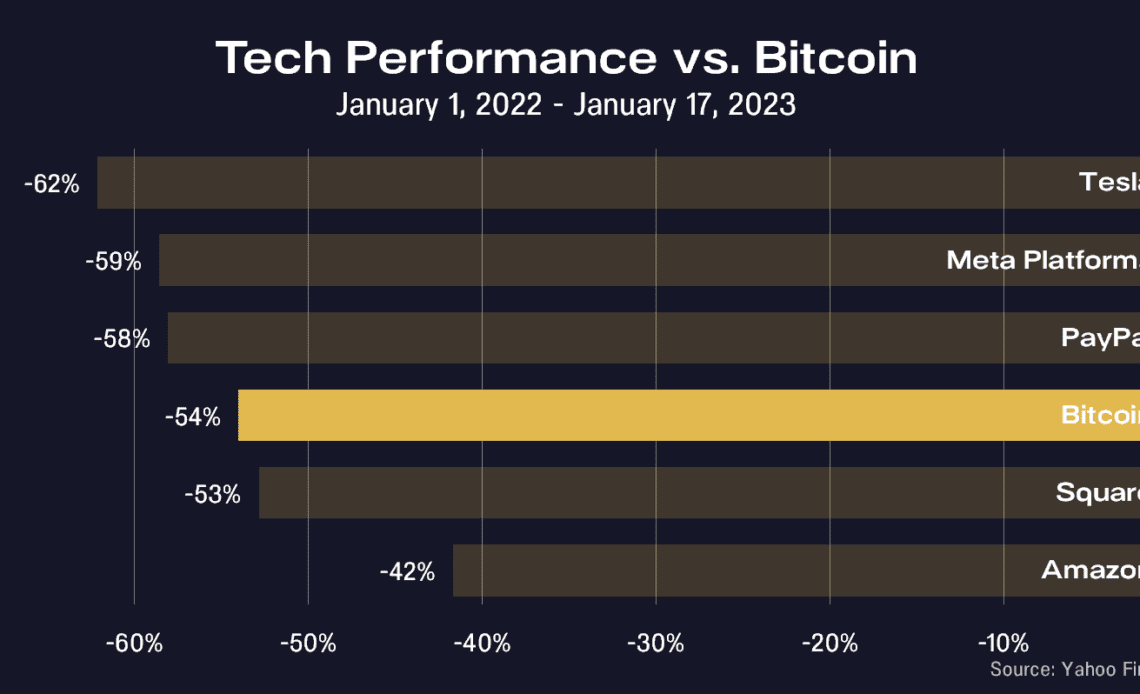 Crypto investment firm Pantera Capital released a ‘Year Ahead’ letter to investors on Jan. 23, in which it disclosed data showcasing the blockchain industry’s resilient nature.

CEO of Pantera Capital, Dan Morehead, shared an overview of the company’s outlook on 2023 in which he stated;

“Blockchain’s resilience in the face of a terrible macro market for risk assets and historic idiosyncratic disasters is impressive.”

In comparison to the biggest companies in the tech industry, Bitcoin has outperformed Tesla, Meta, and PayPal over the past 12 months. Pantera’s data, however, cut off on Jan. 17, meaning that it does not account for the continued rally in Bitcoin’s price. As of press time, Bitcoin is now down 48%, putting it ahead of Square on the below chart.

In the letter to investors, Morehead stated that he was not surprised that Bitcoin had performed so well, citing his experience of three previous bear markets. Further, he revealed that he believes the bottom of the market has already been and gone.

“I believe that it has already bottomed and we will see blockchain assets continue their 13-year 2.3x per year appreciation trend soon.”

The resilience of DeFi over CeFi

Joey Krug, the CO-CIO of Pantera, shared his outlook for 2023 in the letter, calling 2022 “probably the biggest year of upheaval in crypto history.” Comparing 2022 with 2014, Krug compared the crypto projects that failed last year to those that collapsed following the first Bitcoin halving. Specifically, Krug remarked, “many projects and companies that exemplified the antithesis of crypto’s fundamental principles blew up.”

Krug went on to identify a core issue within many ‘crypto’ companies that have thrived in recent years. Crypto is built on permissionless technology and was always designed to remove the need for trust. However, many companies that failed in 2022 required users to trust them – a trust that seems to have been exploited.

“Actual crypto — like on-chain, smart contract, protocol-based crypto — really mitigates these problems because you don’t need to hand all your money over to one entity that claims, trust us.”

Further, Krug took a shot at those who argue against the relevancy of smart contracts and the issues of ‘risky’ DeFi lending. Assuredly, he pointed out that “it’s not the computer program’s fault if your loan doesn’t get paid back” due to a poorly designed smart contract.