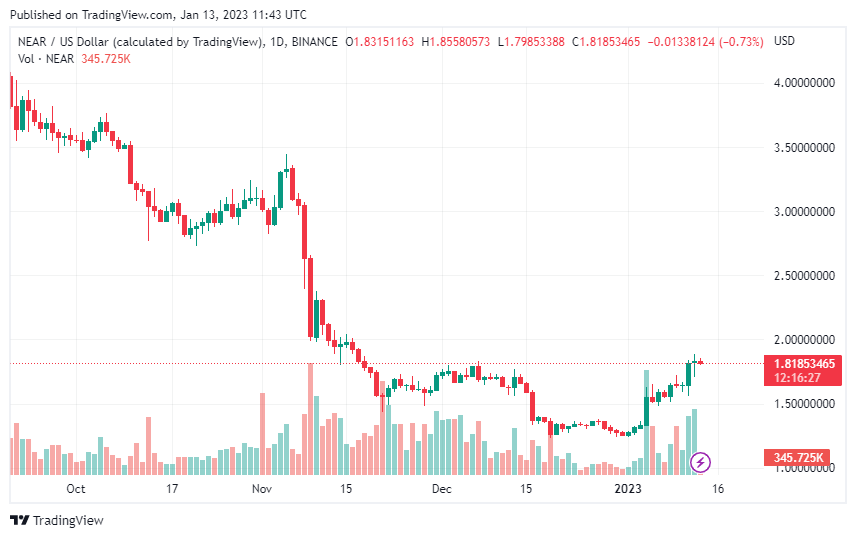 NEAR is soaring on the price chart, with a 3.10% increase in the last 24 hours. Even with the bearish nature of the crypto market in 2022, the NEAR protocol started the year strong. The adverse events of 2022 pushed cryptocurrencies under the scrutiny of regulators. However, the market is slowly picking up pace this 2023.

According to a Coin Guru tweet, NEAR is moving upwards, gaining 4.92% in 1 hour. NEAR is a cryptocurrency project designed to be community-based. It is a cloud-computing platform that enables faster transactions and interaction among blockchains.

What Is Behind The Price Surge?

Several factors might be responsible for this increase in the price of NEAR tokens. Web3 innovations top the list of these factors. Web3 has taken over the crypto space with various applications such as gaming, NFTs, fast transactions, etc., and NEAR is at its frontlines.

NEAR is home to almost 1,000 projects. SweatEconomy is one of its renowned apps with a customer base of over 14 million individuals. The NEAR Protocol development team also hinted that its sharding mechanism, Nightshade, would launch in 2023.

Also, NEAR Protocol gives users an enabling environment to transact seamlessly. Statistics reveal that 22.6 million #NEAR wallets have been created since late 2020. The protocol also supports the staking of NEAR tokens. With its innovative thinking and support of widely adopted decentralized applications (DApps), the attention on NEAR is soaring.

However, Alex, a Twitter user, was pessimistic about NEAR and its projects. In an opinion poll, he stated his intention to expose a potential rug-pull event on the network if followers supported the action. 95.7% have voted yes in support of the exposure. But Alex is yet to go into details of this particular project. Some users believe he intends to create FUD in the market.

What Next For NEAR Protocol Token?

NEAR is currently trading above its 50-day Simple Moving Average (SMA); so more positive price movement is expected in the short term. It is still below its 200-day SMA, indicating a possible reversal in the long term…