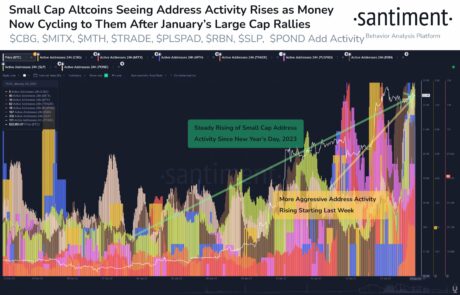 With the crypto market rally, altcoins have benefitted just as much as bitcoin. Digital assets across the space have been able to return to their pre-FTX collapse levels, signaling the start of a bull run. However, as the market begins to settle into this new normal, investors are moving gains around from larger cap assets to take advantage of possible price movement in smaller altcoins.

A recent report from on-chain data aggregation website Santiment shows that investors may be moving money out of larger cap coins such as Cardano and Solana and moving to small cap coins. This paints a picture of a rotation of funds rather than outright pulling money out of the crypto sector.

Santiment notes that the large gains recorded by the likes of Solana, Cardano, and Polkadot are now being moved into smaller altcoins. Most of these coins are top 200 and below tokens with market caps lower than $300 million.

The cycling of funds into these smaller altcoins is shown by their address activity. The image shared by Santiment shows a significant uptick in the address activities of these coins. Most notably, the uptick was seen from last week as a lot of these larger cap coins hit new local peaks.

The small cap coins mentioned in the report are TRADE, RBN, SLP, PLSPAD, POND, MITX, MTH, and CBG. Most of these are coins flying under the radar. Ribbon Finance (RBN) which is the most prominent on the list is only at a $139.7 million market cap but has risen 24% in the last seven days.

What Happens To These Tokens?

The tokens mentioned by Santiment are still small enough that they can see prominent movement with just a fraction of the amount needed to move the prices of the likes of SOL and ADA. This means that if this rotation of gains from large caps to small cap altcoins continues, then these tokens could see positive movement in the coming days.

However, for coins with such low market caps, just as it is easy to pump their prices, it is also just as easy to drag their prices down with sell-offs from a few large holders. It becomes a double-edged sword for investors who follow the movement. On one hand, it could mean very large gains in a short time, but on the other hand, could see them lose money fast.

A good thing about this though is that attention is being spread out instead of just focusing on a handful of coins. As wallet activity rises for these…