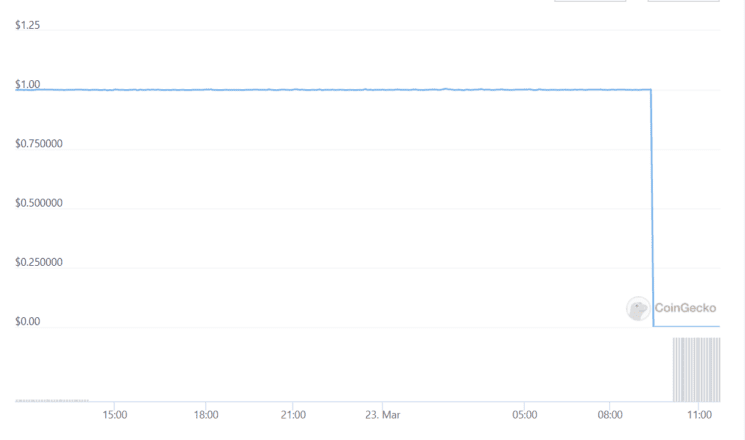 The Solana stablecoin protocol cashio has suffered an exploit leading to a complete collapse of its flagship stablecoin, CASH.

cashio, a stablecoin protocol on Solana, has suffered a major exploit.

Please do not mint any CASH. There is an infinite mint glitch.

We are investigating the issue and we believe we have found the root cause. Please withdraw your funds from pools. We will publish a postmortem ASAP.

The cashio team announced the incident on Twitter early Wednesday. “Please do not mint any CASH,” the team wrote. “There is an infinite glitch.” It also said it was investigating the issue and had found the likely root cause.

cashio is a Solana-based DeFi application that lets users mint CASH stablecoins. On cashio, all deposits are backed by interest-bearing liquidity provider tokens. For example, someone can provide liquidity with USDT and USDC to mint CASH. In this incident, the hacker found a vulnerability that allowed them to mint an infinite supply CASH without having the sufficient backing.

According to data from Solscan, the attacker minted two billion CASH stablecoins and then swapped them for other paired assets (mostly other stablecoins) via the decentralized exchange Saber. Per Defi Llama data, the hacker drained about $28 million worth of liquidity from the exchange. Saber posted an update announcing that it had paused its CASH liquidity pools following the incident.

As a result of the exploit, CASH, whose value is supposed to be pegged to the U.S. dollar, has completely collapsed.

While the precise extent of the damage from the attack is still officially unknown, the renowned crypto security researcher known as samczsun on Twitter said that the losses amounted to about $50 million based on their “quick skim,” of the on-chain data.

Update: Upon further investigation, Crypto Briefing has found that the person behind the cashio attack could be linked to multiple NFT-related rug pulls, including those of the ill-fated Balloonsville,…