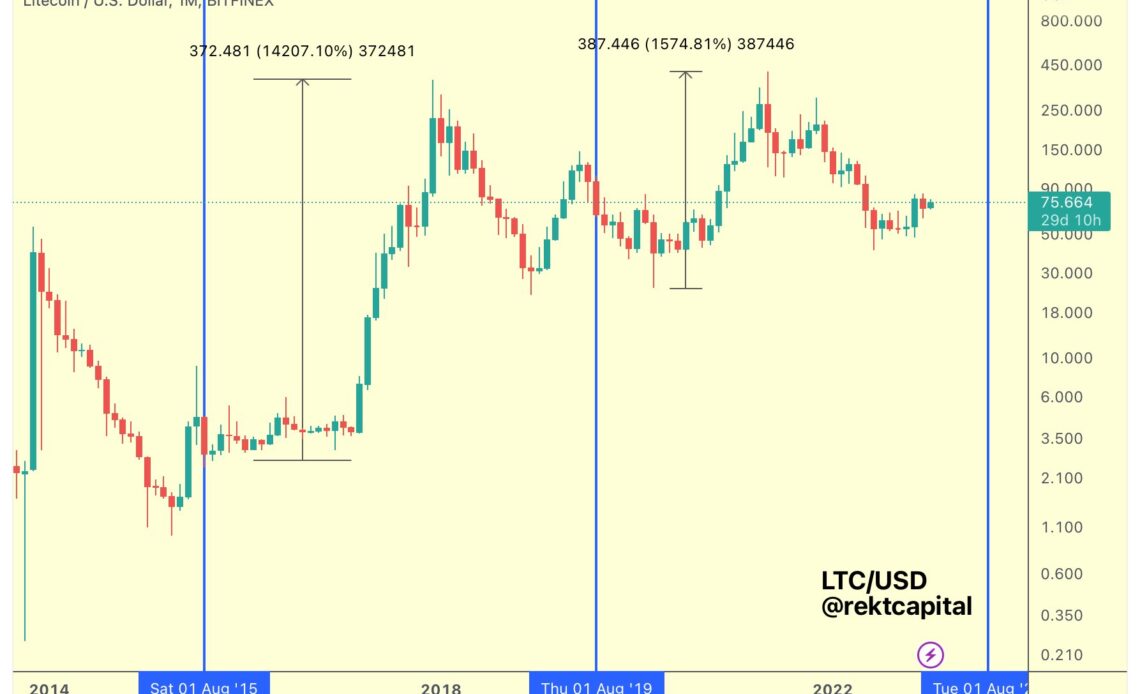 While the Bitcoin halving is not expected until March 13, 2024, according to Coinwarz data, Litecoin investors can already look forward to the traditionally bullish event as soon as this year. According to NiceHash’s estimate, the Litecoin halving will take place in 189 days, on July 19, 2023.

The approaching halving has prompted analyst Rekt Capital to examine Litecoin’s historical price trends before and after the halving in order to provide a prediction for the coming months.

After both halvings, however, the price gains were even stronger. As the chart below from Rekt Capital shows, Litecoin is up +14,200% after the first halving, and after the second halving, it was “still” 1,574%. From this, the analyst derives the historical tendency that LTC tends to rally stronger after the halving than before.

However, this does not mean that investing before the halving is not historically lucrative if you find the right time to place a sell order. According to the analyst, it can be seen from historical data that LTC sees a strong rally prior to the halving before the price drops sharply immediately.

The Litecoin price declined by -73% in the first 578 days after halving. The second halving led the price to drop as much as -83% before it found its bottom after 458 days. “For that reason it’s important to understand when an LTC pre-halving rally tends to top,” the analyst says.

As the chart below shows, LTC peaked 31 days before the event the first time and 61 days before the second occasion. Provided this trend continues, the LTC rally could stop as early as 92 days pre-halving – which would be in May 2023, according to Rekt Capital.

However, the rally could also end as early as April if the days double. It is therefore also interesting to scrutinize how long the rallies lasted in terms of time. The first LTC pre-halving rally lasted for just 90 days, while the second provided a good 180 days of excitement among investors. Therefore, the analyst concludes:

It looks like $LTC pre-halving rallies may be lengthening in time. If this upcoming LTC Pre-Halving rally lasts twice as long…