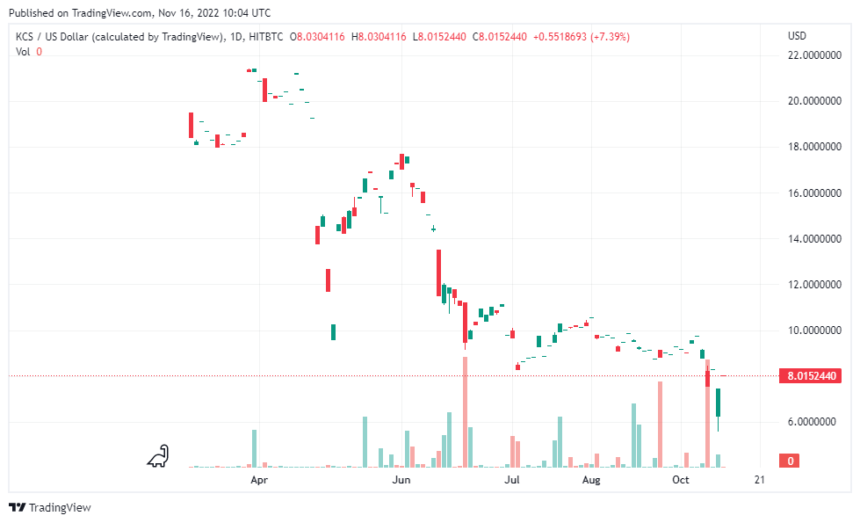 While trading in the red zone at press time, the KuCoin token (KCS) has lost substantially in the last 7 days. The token had joined the entire crypto market in its downward trend after the FTX implosion. However, exchanges like KuCoin may benefit from the recent failure of the FTX collapse.

Johnny Lyu, CEO of KuCoin, assured consumers after FTX’s bankruptcy that the exchange would never misappropriate user assets and be transparent. Lyu’s call for transparency was the main catalyst behind the token’s recent surge. KuCoin has publicly stated that Merkle proof-of-reserves would be available in one month.

KuCoin CEO Johnny Lyu was the first to declare ‘Proof of Reserves’ after the FTX Token FTT/USD disaster. Lyu stated ‘Proof of Reserves’ is a direct reaction to user concern as they stay locked out of their cash with some exchanges restricting withdrawals. According to the CEO, the exchange will release its Proof of Reserve data in four weeks. He believes that the report will assure customers that their money is secure. Lyu also added the data would back his claims that the company has sufficient cash to payout mass withdrawals.

Lyu says the present market situation is like a “growing disease.” He attributes it to the precipitous drop in the value of cryptocurrencies. In the space of a few days, the total market capitalization of cryptocurrencies fell from $1 trillion to $873 billion. “It’s painful to watch innocent users hurt,” he added, conceding that traders will need time to trust crypto exchanges again.

After a 0.72% decrease over the past 24 hours, the global cryptocurrency market seems to be struggling. The global market volume also declined by 1.35% within this period. In spite of these improvements, the global market cap is still less than $900 billion. This indicates that the majority of cryptocurrencies have not yet recovered from the significant drop that occurred over the weekend. As of writing, BTC is down over 5% while ETH fluctuates 1.09% week-on-week.

KuCoin is also down2.94% on the day. However, its 1h chart appears bullish, and we might see the coin trade green in the coming days. During this period, there has been a significant price fluctuation, as the coin’s value has…