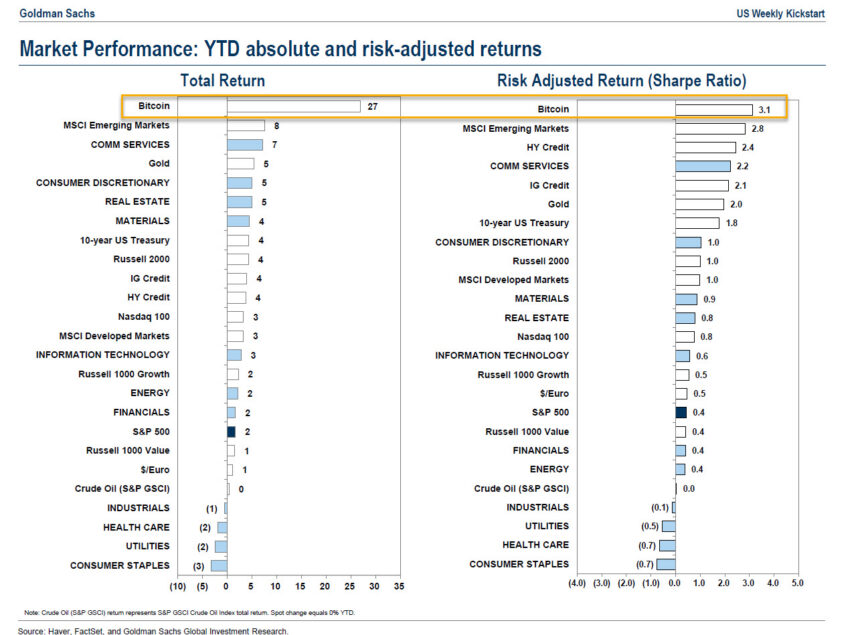 Ahead of Gold, US Treasury, the S&P 500, and others, banking giant Goldman Sachs ranks Bitcoin (BTC) in the top 1 best-performing asset year-to-date, per a Twitter user.

According to Goldman Sachs, Bitcoin has outperformed its cryptocurrency pairs and those major financial institutions of the traditional market with a risk-adjusted return (Sharpe ratio) of 3.1. The Sharpe Ratio is used to measure market volatility-adjusted performance; the higher the ratio, the better the investment, currency, or stock in terms of risk-adjusted returns.

On smaller timeframes, Bitcoin continues its quest to regain lost territory. Slowly but steadily, Bitcoin is attempting to break above the resistance level of $23,800. Bitcoin appears to have a healthy pullback below the resistance line in search of bullish momentum.

Despite the recent crisis of not only the cryptocurrency market with the collapse of FTX and the world economy in free fall, bringing consequences for investors and institutions, the market has also noted the comeback of market makers on cryptocurrency exchanges.

In contrast with Goldman Sachs’ report, according to an annual report by CoinGecko, Bitcoin is the worst-performing asset among the major currencies, with a significant decline of 64%. CoinGecko also noted that since January 2022, the trading volume in the spot market has decreased by 67%.

The new year for Bitcoin and the market started positively, with $200 billion bulking the volume and volatility sheets, according to CoinMarketCap data.

Bitcoin’s year-to-date solid rally has shifted market sentiment. Analysts seem bullish in the short term, expecting the cryptocurrency to increase to as much as $30,000. However, in the long term, economist Lyn Alden said that Bitcoin could be in “considerable danger” in the second quarter of 2023 as liquidity risks increase.

As the price of Bitcoin consolidates below the resistance zone, the cryptocurrency is looking for a trendline break to position itself above the $24,500 level, representing its next obstacle.

The rising 20-day moving average at $20,700 and the Relative Strength Index (RSI) in the overbought zone near 80 suggest that BTC’s bullish trend line can continue and conquer new regions.