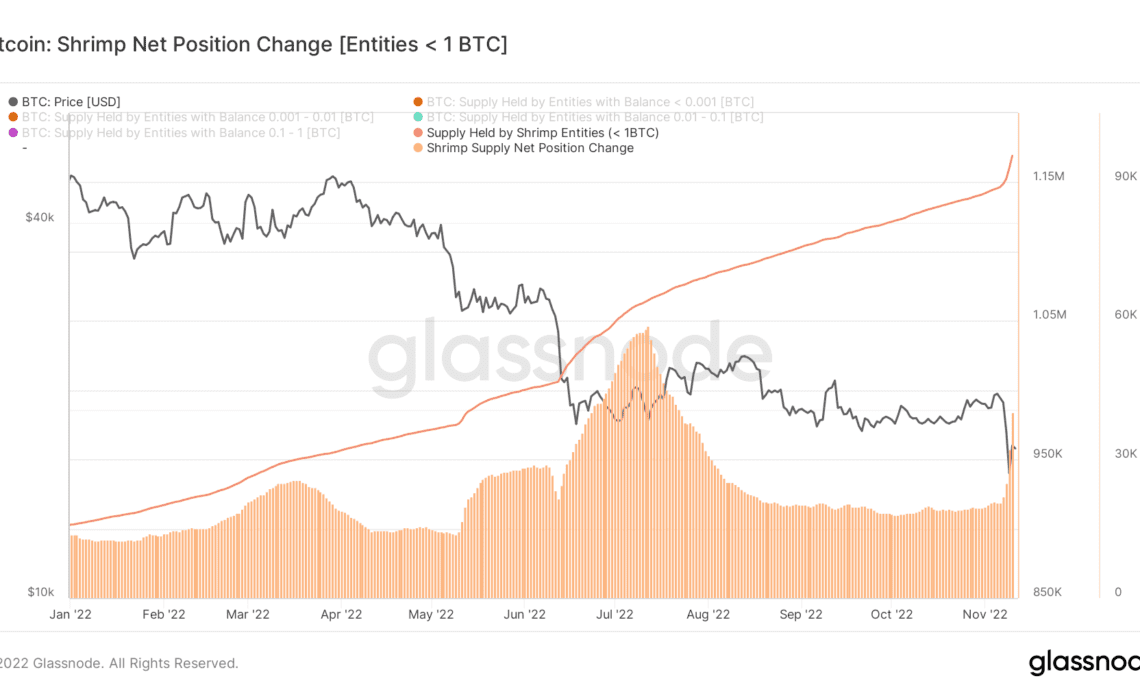 The recent crash of FTX has led to massive capitulation for major cryptocurrencies, with Bitcoin (BTC) trading as low as $15,682 during the last seven days.

However, the decline of the flagship digital asset has not deterred investors as on-chain data showed that all major categories of Bitcoin investors  — whales, crab, and shrimps — aggressively accumulated BTC throughout the week, according to CryptoSlate’s analysis of the data.

Shrimps refer to retail investors with less than 1 BTC. Since the beginning of the bear market, this cohort has been actively adding more BTC as they increasingly found the asset affordable.

CryptoSlate research discovered that Shrimps increased their balance by over 60,000 BTC in July.

Shrimps are very sensitive to price changes and have begun accumulating the digital asset aggressively as BTC is within a price range they consider attractive again.

Shrimp supply net position has been on an upward trend since the start of this year, rising at a regular pace. Glassnode data showed that their holdings recorded a sharp uptick following FTX’s crash as the supply held by shrimps crossed 1 million.

Crabs are retail-sized investors with larger capital accumulations or cohorts that have been accumulating BTC over the years. This cohort is usually well-informed about the assetd despite the size of their holdings — generally between 1 BTC to 10 BTC.

BTC supply held by Crabs reached 2.8 million, and their supply net position significantly spiked in the second week of November — their position has been mostly stable since September.

The next category of investors who bought massively into Bitcoin after the FTX incident are those referred to as the Fish-to-Shark cohort — holders of between 10 to 1000 BTC.

According to on-chain data, BTC supply held by this class dropped massively between May and June as the crypto industry was still reeling from the Terra LUNA crash.

However, since the contagion was contained, they have been aggressively accumulating the flagship digital asset culminating in a new all-time high for the year at above 6.9 million.

Their supply net position, which has been relatively stable since August, saw a massive spike in the second week of November.