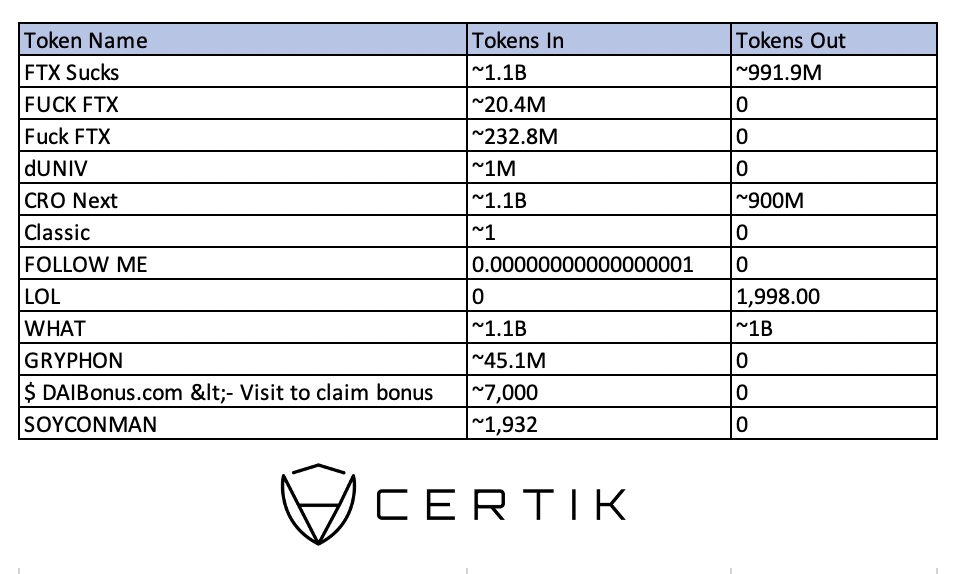 The FTX hacker that drained over $450 million worth of assets just moments after the doomed crypto exchange filed for bankruptcy on Nov. 11, continues to drain assets from the exchange, four days after the hack was first flagged.

Crypto analytic firm Certik in a Tweet noted that the hacker wallet is still draining crypto assets from the wallets associated with the FTX and FTX.US. The FTX hacker wallet currently holds $62 million worth of assets.

Since Nov. 12 the hacker wallet has received and swapped 3.2 billion meme tokens and sent 2.8 billion of these tokens to popular addresses. These meme tokens mostly comprised profanity tokens such as FTX Sucks, F*ck FTX, CRO Next and more.

The ERC-20 standard transfer and transferFrom functions can be modified to allow any arbitrary address to be the sender of tokens, as long as this is specified within the smart contract, resulting in a token being transferred from a different address than the one that initiated the transaction.

These tokens can be sent to any address and then sent out of that address (to any other address), without the address owner having any control of those tokens. If you open the transaction and see “sent from,” it will show a different address.

As Cointelegraph reported on Nov, 12, the hack was flagged right after FTX announced bankruptcy. At the time, out of the $663 million drained, around $477 million were suspected to be stolen, while the remainder is believed to be moved into secure storage by FTX themselves.

The fact that hackers managed to drain assets from FTX global and FTX.US at the same time, despite these two entities being completely independent, became a hot topic of discussion raising speculations about it being an insid job.