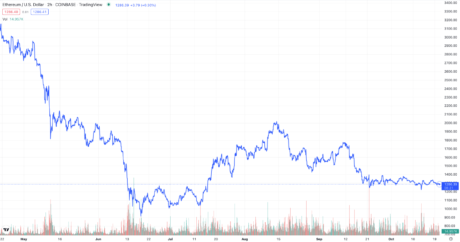 Fidelity Digital Assets is adding support for Ethereum trading for institutional trading effective at the end of the month. The news comes through a widely amplified screenshot of a leaked email that was reportedly sent to the firm’s clients.

Lets take a look at what we know in the early days around this leak, with realized support for Ethereum expected to be just a week away.

Fidelity Investments operates one of the biggest financial institution behemoths on the planet, and has shown continued investment in their digital asset division. While the perspective last year from Fidelity Digital Assets – throughout the midst of the bull market – was that institutional demand for Ethereum was not sufficient, that seems to have changed course. According to reports surrounding the leaked memo, Fidelity Digital is expected to offer Ether buying, selling and trading for institutional clients as early as October 28.

The move is surprising to some, considering the bear market conditions that have persisted this year.

The Building Blocks Of Institutional Investment

This announcement, however, might not be surprising to all. A survey conducted by Fidelity Digital last year that engaged financial advisors, high-net-worth investors, hedge funds, family offices, endowments and foundations, and similar businesses across the globe, found that price volatility and lack of fundamentals have been two main drivers behind skepticism around digital asset investments.

One year later, the market has found relatively stability (albeit, bear market stability) compared to years past, and there is more use cases behind Ethereum blockchain-based utility than ever before. Has that been enough for the tide to turn when it comes to institutional investment? This move from Fidelity Digital suggests so. Additional movement throughout this year has suggested Fidelity’s interest in continuing a push into digital assets, too, such as a bullish perspective in recent months from Fidelity’s Director of Macro Jurrien Timmer, and company-wide support for Bitcoin allocations in employee 401k’s. Just last week, the company continued it’s push, launching an Ethereum Index Fund.