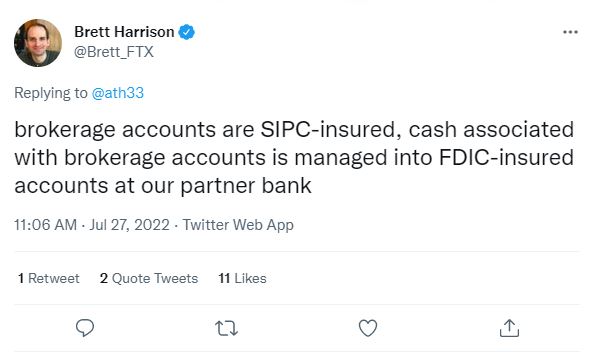 The Federal Deposit Insurance Corporation has called upon FTX.US President Brett Harrison to take down a tweet suggesting that FTX.US was FDIC-insured.

The Federal Deposit Insurance Corporation (FDIC) announced today that five crypto companies had made false and misleading statements regarding the status of their deposit insurance. Crypto exchange FTX.US and its President, Brett Harrison, were named alongside Cryptonews, CryptoSec, SmartAsset, and a website called FDICCrypto.com.

According to the agency, Harrison falsely claimed on Twitter that “direct deposits from employers to FTX.US were stored in individually FDIC-insured bank accounts in the users’ names” and that company stocks were held in “FDIC-insured and SPIC-insured brokerage accounts.” The agency furthermore criticized the company for identifying as FDIC-insured on its website.

The FDIC stated that some of the FTX.US products mentioned by Harrison and the FTX.US website were in fact uninsured, that deposits were not protected to the claimed extent, and that the FDIC’s name was being misused.

The agency called on Harrison and FTX.US to immediately remove all statements suggesting, explicitly or implicitly, that FTX.US was FDIC-insured. It furthermore asked them to cease and desist from making further such statements and to provide the FDIC with written confirmation and proof that it has complied. Failure to do so would open up the crypto exchange and Harrison to civil monetary penalties.

Harrison responded to the letter by stating that “per the FDIC’s instruction I deleted the tweet” and that he and FTX.US “really didn’t mean to mislead anyone.” At press time, however, his Twitter account still showed multiple tweets that possibly imply FTX.US was indirectly insured by the FDIC.

U.S. regulatory agencies have been moving in on crypto industry leaders lately, especially the Securities and Exchange Commission, which recently opened an investigation into Coinbase for allegedly selling unregistered securities and is reportedly probing other…