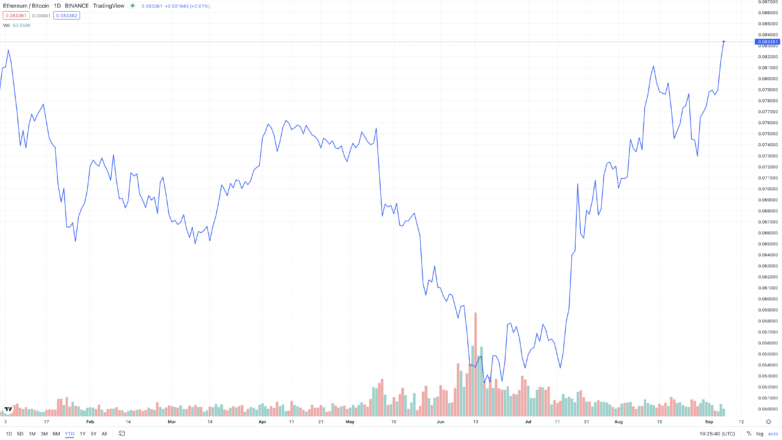 With “the Merge” now days away, Ethereum is surging against Bitcoin.

Ethereum enthusiasts have discussed the ratio at length in the past in tandem with “the flippening”—a hypothetical event that would see Ethereum overtake or “flip” Bitcoin’s market capitalization. The ETH:BTC ratio topped 0.1 back in June 2017 and January 2018, but for the flippening to occur, it would need to hit roughly 0.159 based on the current circulating supply of both assets (as the ETH and BTC coin supplies adjust over time, the ratio also changes).

Ethereum’s current lead against Bitcoin can be explained by growing hype for the Merge, the number two blockchain’s long-awaited Proof-of-Stake upgrade. The Merge is due to ship sometime between September 13 and 15, and the first part of the event is happening today. Dubbed Bellatrix, the first step of the upgrade will see Ethereum update its consensus layer ahead of the Merge itself. The second phase, known as Paris, will then complete when the Terminal Total Difficulty threshold hits 58750000000000000000000, marking the difficulty required to mine the final block under Proof-of-Work. After that, all new Ethereum blocks will be added to the chain by validators staking ETH.

After suffering from years of delays, the Merge is widely expected to be the biggest crypto event of 2022. It’s set to bring several major changes to Ethereum, including a 99.99% reduction in energy consumption and 90% cut in ETH issuance. That’s partly why ETH has rallied in recent weeks. Interest surrounding the update is such that many Ethereum-adjacent tokens, including the likes of Ethereum Classic’s ETC and Lido’s LDO, have rallied alongside ETH over recent weeks. Ethereum Classic has benefited because miners are…