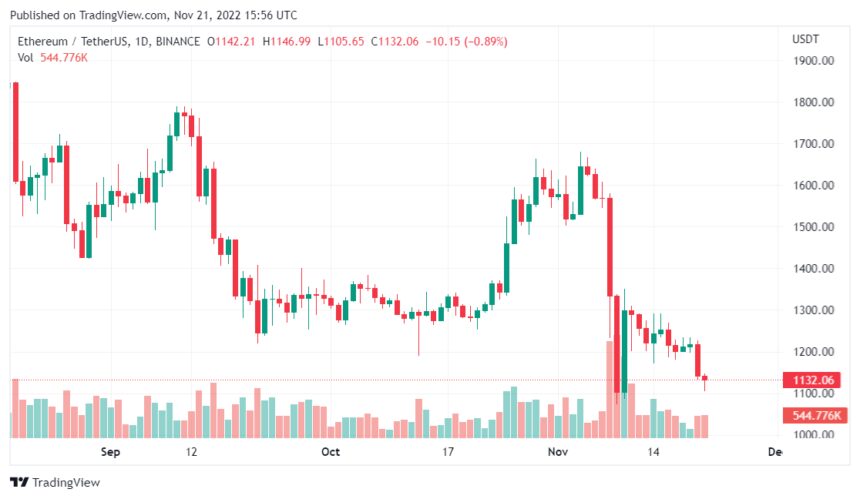 Ethereum has seen a decline over the past 24 hours. Being hit with new selling pressure, the world’s second-largest crypto asset has plummeted by over 8%. Despite its recent pressure, the whales have become more intense on ETH.

The crypto market is still red, with most crypto assets declining. The bearish trend from the collapse of the FTX crypto exchange is getting more intense. Most of the prominent crypto tokens have seen a drop in their performance.

Notably, the broader crypto market is passing through some corrections. The cumulative market cap has plummeted by almost 5% over the past day.

According to data from Whale Alert, crypto whales are attracted by Ethereum’s new price drop. As a result, they are aggressively accumulating Ether. The report indicated that the whales had moved almost 400K ETH from several crypto exchanges. This figure shows that over $445 million has been transferred to many unknown wallets despite the price dip.

The whales moved about 300K ETH worth almost $333 million from Upbit to several wallets. The whale tracker pointed out the most significant transaction involving the addition of a $129.1 million price of Ether from Upbit.

Additionally, the tracker noted a whale accumulation of 99.99K ETH from the Bitfinex crypto exchange. The recorded transaction is worth about $12.4 million.

The recent whale attention and accumulation are coming as Ethereum recorded a massive drop in its price. At the time of writing, ETH is hovering around $1,132, indicating a 1% drop within the past 24 hours. Also, the token has suffered a massive drop of more than 12% in its value over the past seven days. Its market cap is now at $137.57 billion.

Ethereum’s trading volume has skyrocketed to over $11.9 billion in the last 24 hours. It indicated a more than 103% increase in a single day.

Records on liquidation over the past day are pretty on the higher side. As per Coinglass data, about 66,704 traders liquidated over $180 million of their positions in the crypto market within the past 24 hours.

Also, the past few weeks show that Ethereum now underperforms Bitcoin. The primary…