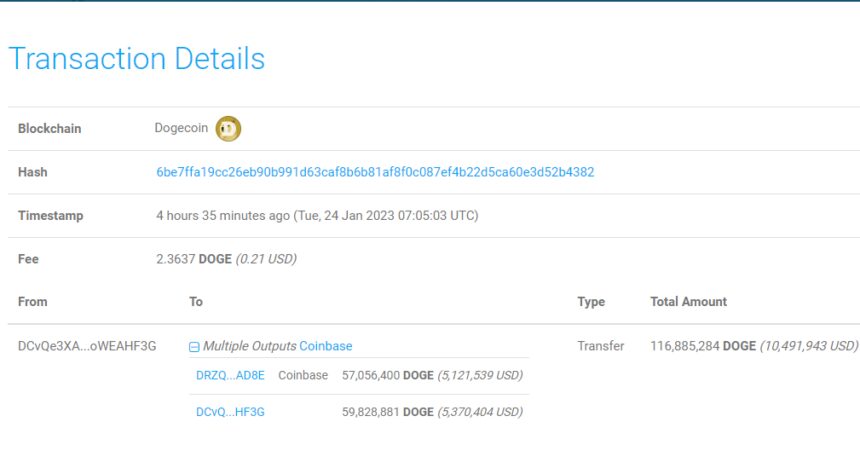 Data shows a Dogecoin whale has deposited more than $5 million in the crypto to Coinbase. Here’s what it may mean for DOGE’s price.

As per data from the crypto transaction tracker service Whale Alert, a massive Dogecoin transaction has taken place on the blockchain today. In total, this transfer involved the movement of 57,056,400 DOGE, worth upwards of $5 million at the time the transaction was sent.

Since the amount here is so large, the entity behind the transfer is likely to be a whale, or at least a group made up of multiple large investors. Due to the sheer volume of tokens involved in transactions like these, they can sometimes cause noticeable ripples in the price of the asset.

But what change may potentially be produced in the crypto’s value from such a movement of coins depends on several factors, with the exact intent behind the transaction being the main one.

Here are some specifics surrounding the latest Dogecoin whale transaction, which may shed some light on why the investor decided to make this move:

As can be seen above, the sending address for this Dogecoin transaction was an unknown address, which is a type of address that’s unattached to any known centralized platform, and thus is likely a personal wallet. The receiver in this case was an address affiliated with the crypto exchange Coinbase.

Note that the transaction details show there being another receiver present for this transaction, with the total amount of the transfer being almost $10.5 million. But on closer inspection, it’s clear that it’s just the same address as the sender, meaning that this output is only showing the amount still remaining in the original wallet (that is, a bit more than $5.3 million, as $5.1 million went towards Coinbase).

A transaction like this where coins move from a personal wallet to an exchange is called an exchange inflow. Investors usually deposit to exchanges for selling purposes, so inflows can have bearish implications for the price of the meme coin.

If this Dogecoin whale truly made this transfer with the intent to sell on Coinbase, then DOGE may feel a negative effect from it. Data from WhaleStats, however, shows that the crypto was in the top 10 most bought tokens by the largest BNB Smart Chain (BSC) whales just yesterday.