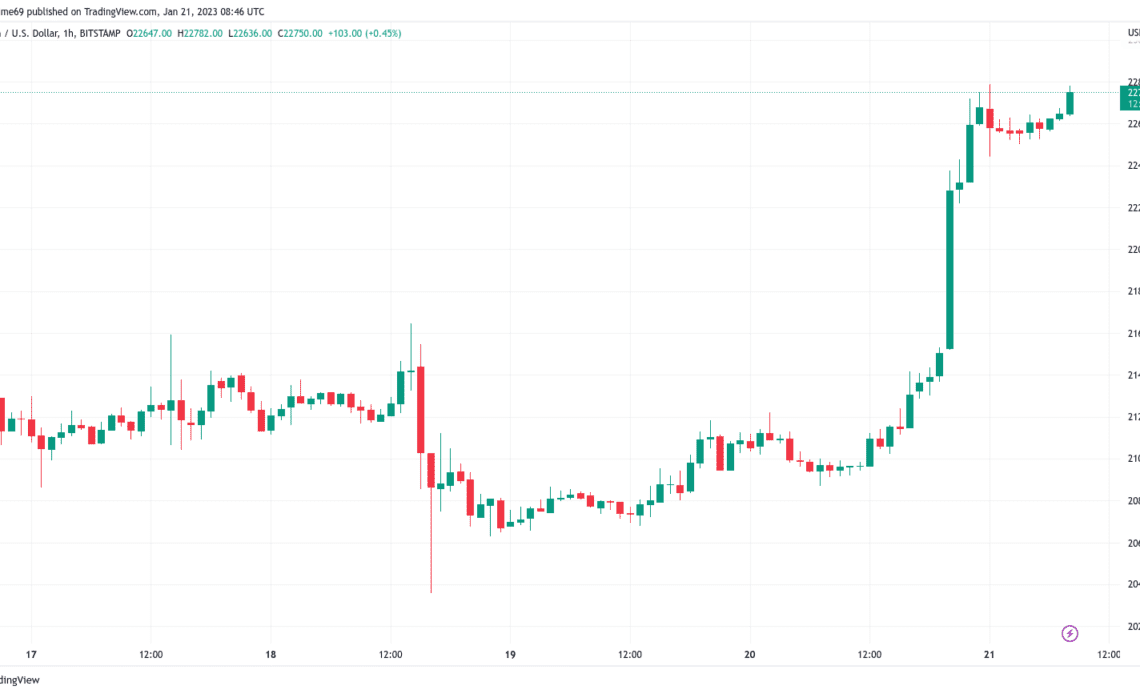 Data from Cointelegraph Markets Pro and TradingView showed BTC/USD battling bears to reach $22,790 on Bitstamp overnight — its highest since August.

With new multi-month peaks coming in quick succession despite fears of a major correction, Bitcoin continued to surprise as traders cleared the way for more upside.

As noted by intraday trader Skew, Asia was leading the way into the weekend, with sellside pressure from market makers being absorbed on exchanges.

“Volatility continues. Don’t give it all back, be sure to take some profit along the way,” it wrote in part of a subsequent update.

As ever, Bitcoin was far from above suspicion at its latest highs, with some familiar faces still urging traders to prepare for the worst.

“The bigger the pump, the harder BTC will fall down,” analyst Toni Ghinea tweeted, while Crypto Tony argued that the entire move may be nothing more than a “dead cat bounce.”

“Regardless if this is dead cat relief wave or a reversal on Bitcoin, it is great to see some optimism back in Crypto,” he summarized.

Considering why further gains were coming after the end of the week’s TradFi trading, one popular commentator additionally suggested that traders were being manipulative.

“No one who genuinely wants to buy and own crypto waits until the Friday close each week to execute,” an update read, adding that those buyers’ “aim is clear.”

Earlier in the week, Material Indicators had likewise warned of “choreographed” bidding on BTC.

Key moving average on the horizon

Attention thus focused on the upcoming weekly close for BTC/USD, which if current prices were to sustain would be its best since mid-August.

At the same time, Bitcoin looked to be about to print a so-called “death…