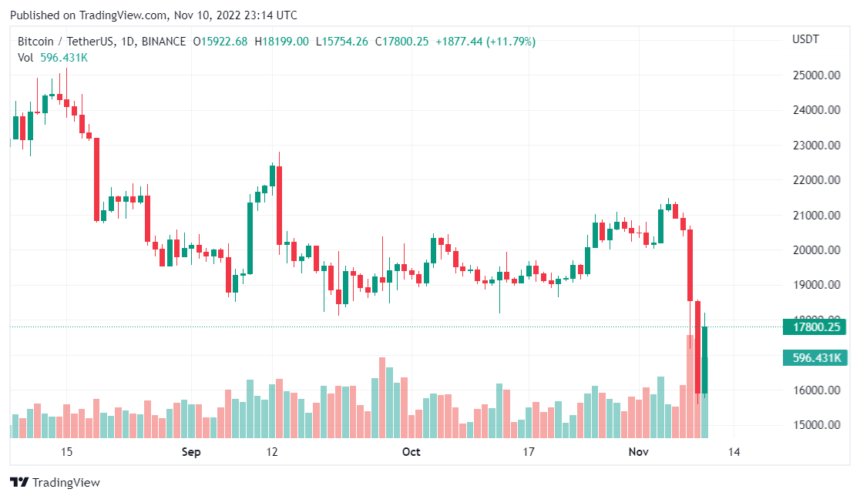 Some days back, the crypto market was celebrating a significant rally in the price of major cryptocurrencies. Bitcoin hit a remarkable recovery surpassing the $20K level to $21,500.

However, the story quickly changed as the FTT crash dragged the other tokens down. Due to the ongoing FTX crisis in the crypto space, many assets have recorded new all-time lows.

Latest reports show that BTC has hit a two-year low, plummeting to $15,500 and leaving the market with a $200 billion loss. It all began with a clash of interest between Binance and FTX, which drove the former’s decision to liquidate its FTT holdings irregularities. Not long after the feud, FTX liquidated its ETH holdings amid rumors of insolvency issues.

Bitcoin Plummets To A Two-Year Low

The cascade effect landed on Bitcoin. Within hours after the celebration, the multi-week high above $21,500, Bitcoin crash-landed to $17,000. As the crisis continued, Bitcoin recorded another decline on Bitstamp yesterday. Finally, bitcoin slumped to $15,500, an all-time low since November 2020.

Although BTC has recovered over $1000 since the last slump, its valuation – 6.81% down – is still below the psychological level. Nevertheless, it maintains a market cap above $317 billion and 38.4% dominance.

Bitcoin is not the only receiver of the hard blow in the market recently; other cryptocurrencies got even more. For example, Ethereum dropped from $1,600 to nearly $1,100 but recovered slightly above $1,300.

Solana, which went down to $9 yesterday, now trades at $14 with a 17% decline. Given the news of the upcoming event to Unlock SOL tokens, Solana may meet more volatility today. The total crypto market has lost about $200 billion since the FTX/Binance feud began.

Meanwhile, FTT’s situation is terrible. The token has incurred an additional 42% loss in value and now trades at $2.76. Given the circumstances surrounding FTX’s situation, including the alleged investigations against the firm, Binance has pulled out of its plans to acquire the exchange.

In the announcement, Binance noted that it hoped to assist FTX in providing liquidity to…