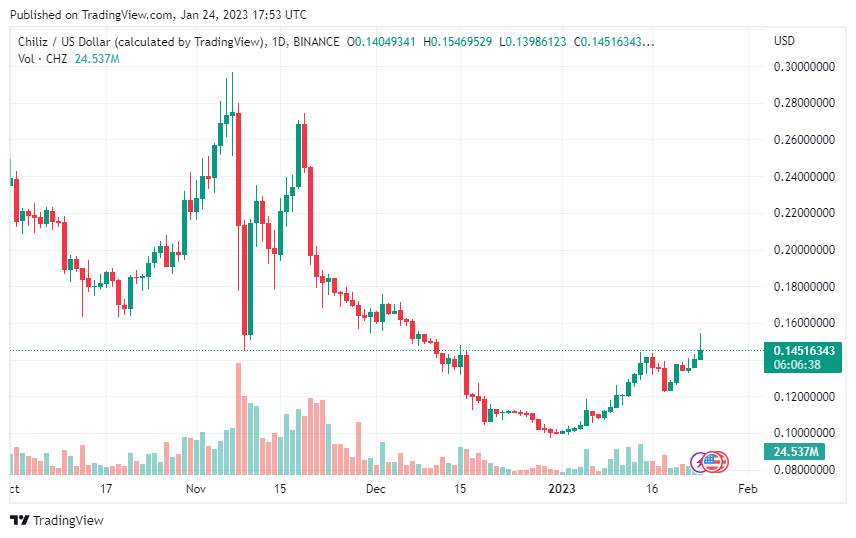 For instance, Chiliz’s price is gaining today, reflecting the positive moves of the general market. CHZ’s trading volume has also increased by 82.02% in 24 hours, showing rising interest among investors.

CHZ is among the top gainers today, recording an almost 6% increase in value. The asset has outperformed market leader Bitcoin today, which recorded a 0.02% increase in 24 hours. This price increase might support a bull run in the coming weeks.

Some experts have predicted 2023 to be bullish, and the price performance of cryptos so far is leaning toward this prediction.

What Is Behind The Chiliz (CHZ) Rally?

CHZ acts as a fan token and has always been a community-driven project that relies on voting power from members. The Chiliz project has many lucrative partnerships with soccer giants such as Juventus, Manchester City, FC Barcelona, and Paris Saint-Germain. It equips the club supporters with limited editions of fan tokens.

Sports is a lucrative sector worldwide, with fans investing heavily in merchandise and fan tokens to support their favorite teams. The platform’s native token CHZ is the currency for purchasing these fan tokens through smart contracts. These fan tokens are offered in limited supply to preserve their scarcity and uniqueness.

The Chiliz development team posted the progressive strides the network has made in 2022 and early 2023 on Twitter. It has formed new partnerships with notable partners such as Italian Serie A teams, MLS teams, and SL Benfica. Also, the Scoville Testnet upgrade launched in 2022 has recorded success in stages 1-5. According to the development team, Stage 6 will launch in 2023.

CHZ Price Prediction Where Is it Headed?

Chiliz (CHZ) is trading at 0.1461, a 5.29% increase in the token’s value. The Chiliz token is in an uptrend, as the formation of consecutive green candles with higher highs indicates.