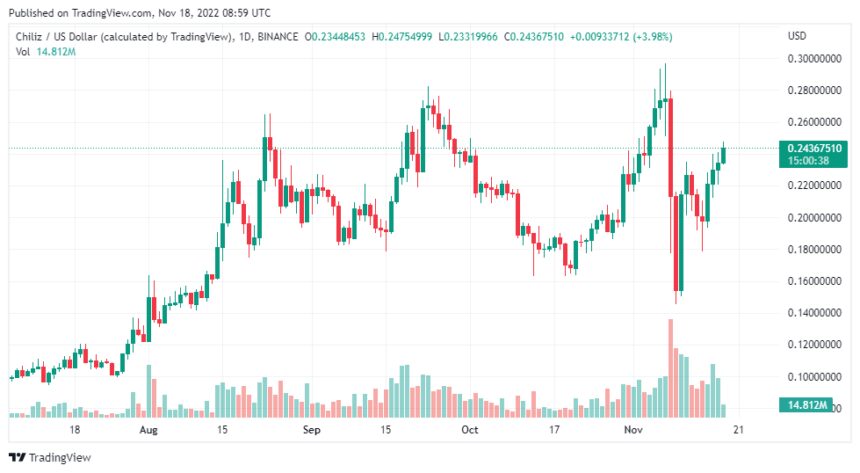 CHZ continues to lead the market in gains as more anticipation builds toward the World Cup. The go-to fan token was seen keeping an intraday profit of 7.37%. It reached a local high of $0.246 during the day before retracting to its current price of $0.242. Despite falling below its trading-day floor, it quickly bounced back, leaving traders with substantial profits.

As per data retrieved from CoinMarketCap, CHZ also holds gains against the top guns. At press time, CHZ held over 5% gains ahead of BTC and ETH. The token is already on a path to touch its intraday high and might see a positive break out.

Due to its connection with sports tokens, Chiliz has experienced a resurgence in investor interest in its native cryptocurrency, CHZ. Alexandre Dreyfus has seized the chance to emphasize why Chiliz has a promising future in the sports sector.

The CEO talked about NFTs, which he mentioned was an awesome way to connect fans with their favorite teams. However, Dreyfus mentioned that most NFTs in the market lack utility. He added that this is a major reason why fans lose interest in these initiatives over time.

Dreyfus added that scalability might not be NFTs’ strongest suit. As a substitute, he said that fan tokens are a fantastic way to scale a team. This is so that teams may utilize them to create powerful digital communities since they are fungible. He added;

It’s this ability to provide access and individual recognition to audiences at huge scale that sets Fan Tokens apart.

The number of active addresses (30-day) has increased since November 6th. This demonstrated greater user interaction and may be a sign of an optimistic mood. Additionally, the weighted sentiment score was in the green, indicating that CHZ had a good social media outlook.

However, on-chain metrics revealed that throughout November, the percentage of supply on exchanges had decreased. This is quite unlikely, considering the…