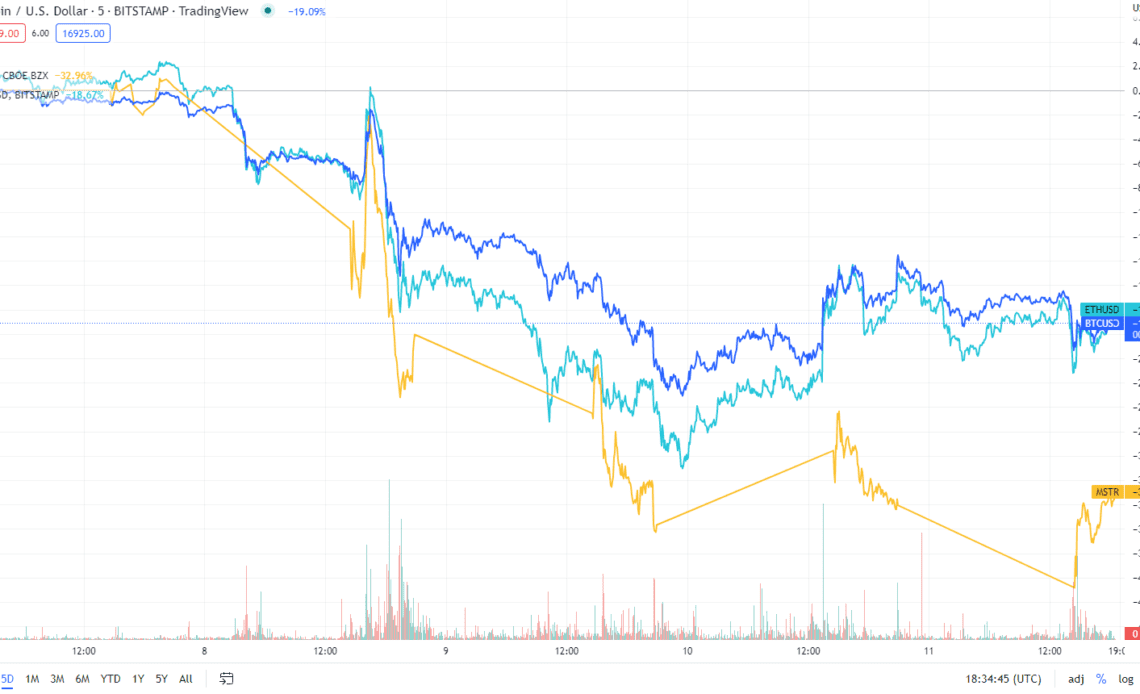 Bitcoin (BTC), Ether (ETH) and cryptocurrency-linked stocks like MicroStrategy are seeing a sharp downturn after news broke that FTX announced filing for Chapter 11 bankruptcy and Sam Bankman-Fried stepping down as CEO.

MicroStrategy (MSTR), led by the outspoken advocate of Bitcoin Michael Saylor, is down 32.57% on Nov. 11 in a 5-day period. MicroStrategy holds about 130,000 Bitcoin and, therefore, its stock price is heavily correlated with BTC/USD. Meanwhile, the tech-heavy NASDAQ has gained 0.79%.

Meanwhile, ETH price saw a 22% decrease this past week despite Ether becoming deflationary for the first time since the Merge. Over 8,000 Ether have been burned in the last seven days bringing the yearly rate to -0.354%.

In addition to the FTX debacle hindering the Ether price, a mass amount of futures liquidations caused the price to hit a 4-month low of $1,070 this week.

Bitcoin price back below June lows

Data from Cointelegraph Markets Pro shows Bitcoin has lost 20% of its value in the past week as well. In addition, Bitcoin reached a new yearly low of $15,742 due to the FTX collapse.

According to Charles Edwards, founder of the Capriole Fund, Bitcoin miners reached the red level on an open-source Bitcoin Miner Sell Pressure chart, which shows the most selling in almost five years.

Bitcoin miners are in pain and selling more than they have in almost 5 years!

A free, open-source indicator which tracks on-chain data to highlight when Bitcoin miners are selling more of their reserves than usual. pic.twitter.com/sXpxXXdUiW

The uptick in miner selling has also coincided with a Bitcoin whale moving 3,500 BTC for the first time since 2011.

Is BTC close to bottoming?

But analysts are mixed on whether BTC has bottomed. For instance, trader…