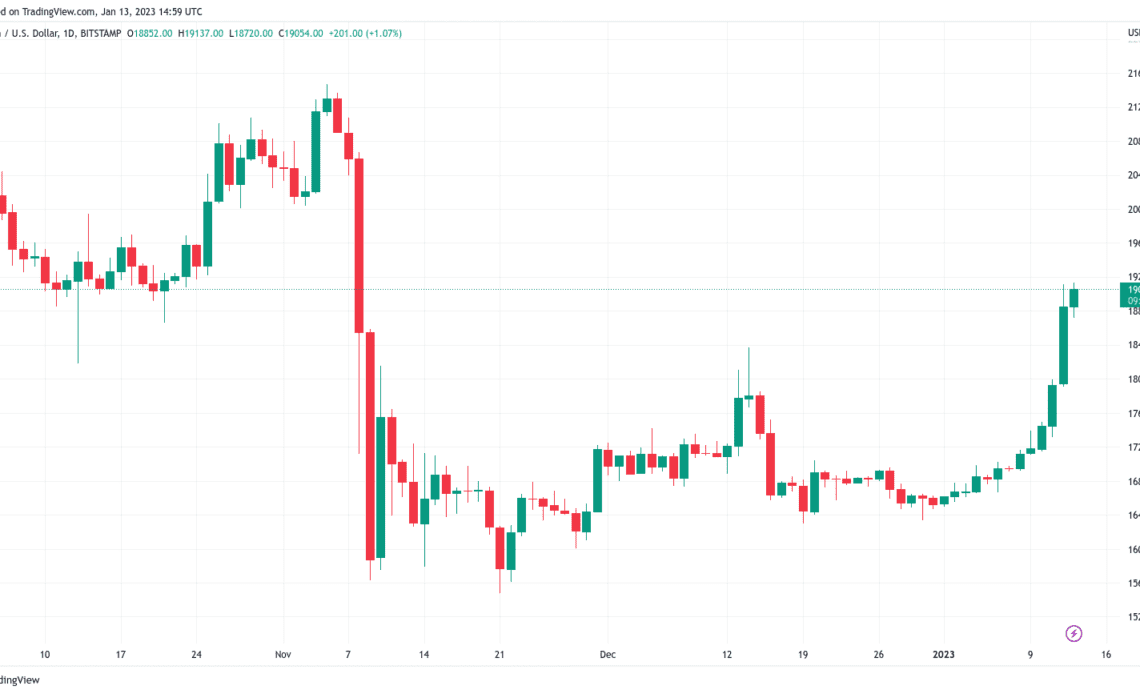 Bitcoin (BTC) stayed near $19,000 at the Jan. 13 Wall Street open as traders hoped a week of swift gains would stick.

BTC price “breakout or fakeout remains to be seen”

The pair rapidly took out sellside liquidity overnight, gapping higher to what on-chain analytics resource Material Indicators forecast could be a retest of the $20,000 mark.

“Seems like BTC is setting up for a retest of resistance at the 2017 Top,” it wrote in part of a Twitter discussion the day prior.

“Whether we see a bonafide breakout or fakeout remains to be seen. Time for patience and discipline.”

An accompanying snapshot of the Binance order book confirmed bulls had broken through multiple sell walls.

“Things just got interesting,” Material Indicators added in comments on the chart.

Characteristic of the current climate, others remained firmly risk-off on Bitcoin despite year-to-date gains approaching 20%.

Among them was popular trader Il Capo of Crypto, who in classic style described current price action as “one of the biggest bull traps I’ve ever seen.”

“Bullish euphoria is real, and price is still below 20k,” he added.

“Funny though, if you look at social media, it’s bull euphoria. If you watch the chart, you have to zoom out a lot to see the entire chart,” he said.

Regardless of its staying power, Bitcoin’s recent surge higher contrasts strongly with the distinct absence of volatility witnessed since the FTX implosion in early November.

Related: Bitcoin gained 300% in year before last halving — Is 2023 different?

For on-chain analytics firm Glassnode, such behavior was arguably due a shake-up sooner rather than later, especially given its persistence through the 2022 yearly candle close.

“The 2022-23 holiday period has been historically quiet, and it is rare for such conditions to stick around for long,” it wrote in the latest edition of its weekly newsletter, “The Week On-Chain,” issued Jan. 9.

“Past occasions where BTC and ETH volatility…