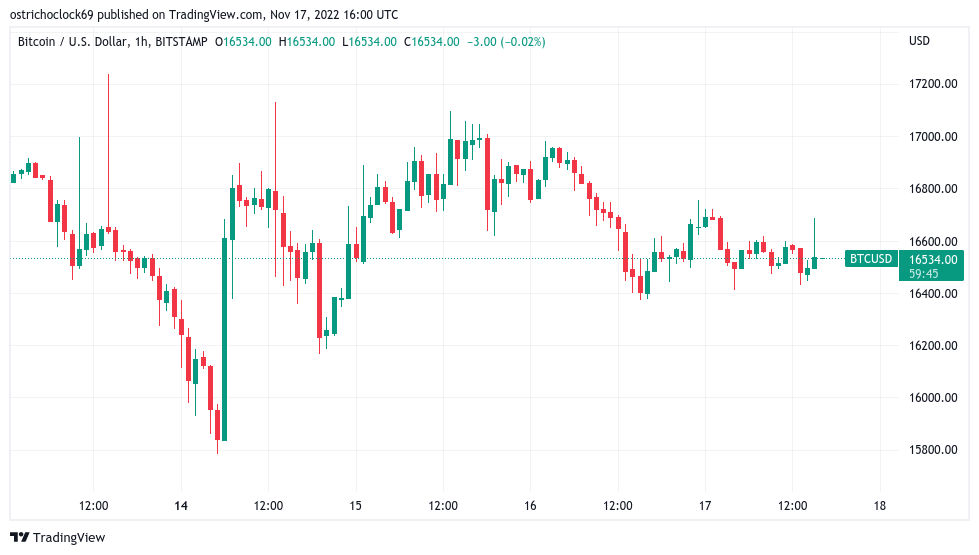 The pair showed acclimatization to events around the FTX insolvency, the latest including revelations that Alameda Research had been immune from liquidation while trading on the platform.

After the departure of Sam Bankman-Fried, new CEO John Ray III wasted no time in acknowledging the extent of the problems left in his wake.

In a filing with the U.S. bankruptcy court for the district of Delaware widely quoted in mainstream media, Ray described corporate control of FTX as a “complete failure.” He wrote:

As Cointelegraph reported, United States lawmakers intend to hold a dedicated hearing on FTX next month, while Bankman-Fried is reportedly subject to efforts to extradite him from the Bahamas.

BTC price action has nonetheless managed to shake off related volatility, as evidenced in the modest reaction to news of contagion impacting the crypto lending arm of Genesis Trading on Nov. 16.

Analyzing the current climate, however, popular commentators on the day were far from optimistic.

“Bulls really need to reclaim $17,600 for us to be able to shift nicely in a long position,” Crypto Tony tweeted, adding that “for now bears are in control.”

Il Capo of Crypto, repeating a warning that altcoins could see further losses of up to 50%, was even more frank in his message to followers.

“I repeat… EXIT ALL THE MARKETS,” he stated the day prior, suggesting that “most people are not ready for what is coming.”