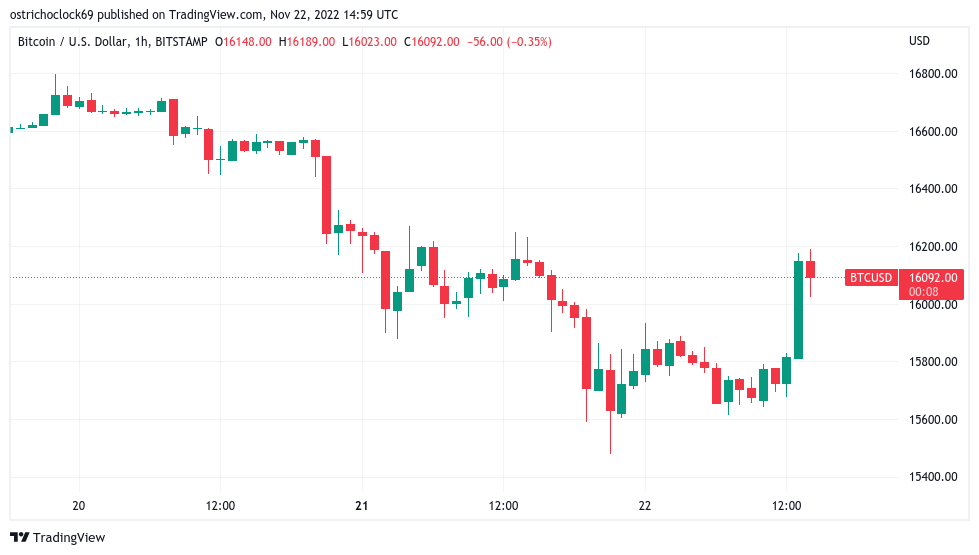 Data from Cointelegraph Markets Pro and TradingView followed BTC/USD as it recrossed the $16,000 mark, having set lows of $15,480 on Bitstamp.

Momentum took the pair to $16,189 before consolidating, marking gains of 3.7% versus the day’s lows.

Talk among analysts remained tied to the Digital Currency Group (DCG) family, including Grayscale, currently at the center of rumors over fallout from defunct exchange FTX.

For monitoring resource Material Indicators, a “guard rail” bid at $12,000 could ultimately be what protected the market should a major capitulation occur over the Thanksgiving holiday period.

“Over $300M in BTC bid liquidity between here and $12k,” it commented on a post by CryptoQuant contributor Maartunn.

“This new $70M buy wall could be a guard rail for the holiday week, it could be related to speculation on a Grayscale announcement or something else. Regardless, we always keep an eye on new fat buy walls.”

As Cointelegraph reported, meanwhile, downside targets for BTC/USD mostly focused on $14,000 or under as the week began.

Other growing concerns centered on long-term holders (LTHs) of Bitcoin.

In its latest weekly newsletter, “The Week On-Chain,” analytics firm Glassnode warned that “non-trivial spending” from old hands was on the increase.

“Their supply has declined by 84,560 BTC post-FTX, which remains one of the most significant declines in the last year,” it noted, adding that the decline was “still underway.”

Likewise, the largest BTC investors, whales, were also net distributing coins to the market, this coming despite previous data showing that certain entities had already begun buying the dip.

“The Whale cohort are in a mode of net distribution at present, sending between 5k and 7k in excess BTC into exchanges,” Glassnode added.

“Meanwhile, the flight of coins off exchanges by almost all cohorts is at an all-time high. The whirlwind impact of the FTX collapse continues to play out, and it remains to be seen just how extensive…