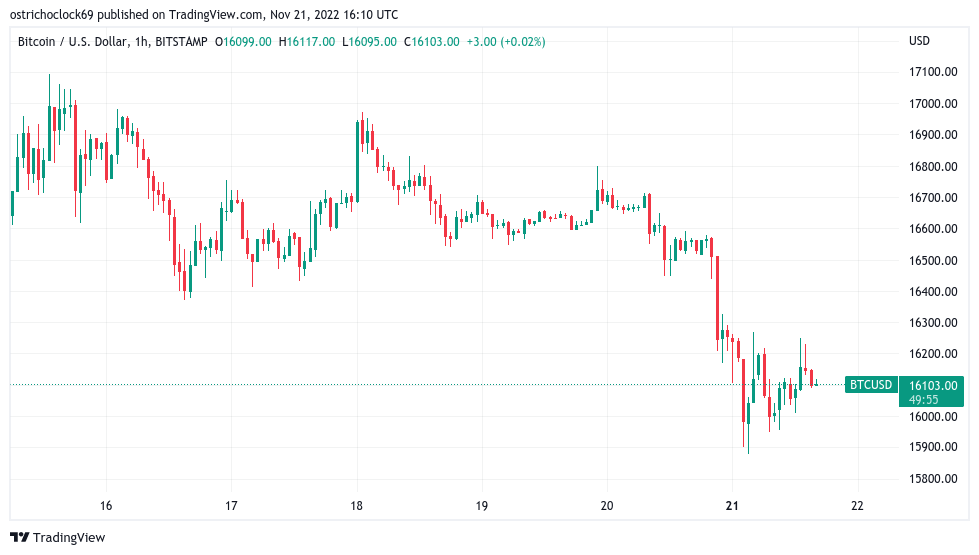 Bitcoin (BTC) held steady at the Nov. 21 Wall Street open following a weekly close at levels not seen since late 2020.

Data from Cointelegraph Markets Pro and TradingView showed BTC/USD hovering above $16,000 after dipping below the level overnight.

Coinbase, the GBTC custodian, reportedly confirmed its Bitcoin holdings — over 635,000 BTC — were safe and present on the day.

GBTC was just one of multiple potential victims in the ongoing meltdown of exchange FTX and its related businesses, however, and crypto prices remained highly sensitive to the topic.

Traders and analysts thus lined up to deliver short-term BTC price targets, these perhaps unsurprisingly being mostly to the downside.

Updating a Twitter discussion with an annotated chart, he highlighted $14,600 as a “most primed” area to increase BTC exposure.

“Time has passed, and the plan hasn’t changed. The re-entry is a bit lower now (descending trendline support),” he summarized in accompanying comments.

If Bitcoin were to halt its descent now, Anbessa said that a reentry point would be just below $17,600 — the site of June’s previous macro low. BTC/USD would need to flip it to support for the strategy to be valid.

Like several others, The London Crypto, partner of exchange ByBit, believes that the ultimate bear market low lies around $12,000 for Bitcoin.

He arrived at the calculation using historical drawdowns from all-time highs.

For every cycle low, there is a high, however, and optimistic The London Crypto was not shy about predicting the good times returning around Bitcoin’s next block subsidy halving.

“Studying our previous cycles high vs lows, we can estimate the low for this bear to be the $10k-$12k range, followed by a high of $175k in…