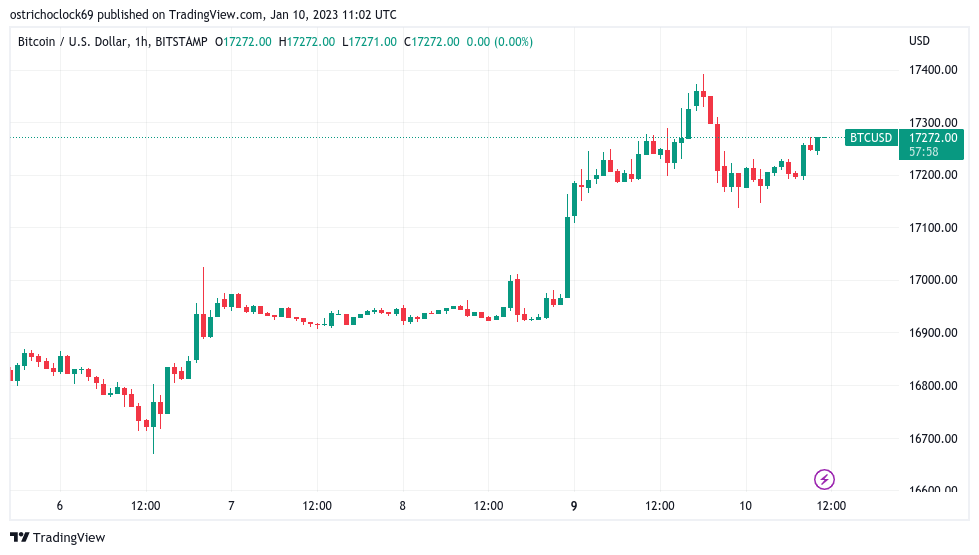 Bitcoin (BTC) stayed above $17,000 on Jan. 10 as risk assets awaited fresh cues on policy from the United States Federal Reserve.

Powell to kick off week of U.S. macro triggers

Data from Cointelegraph Markets Pro and TradingView showed BTC/USD consolidating after hitting $17,396 on Bitstamp the day prior — its highest since Dec. 16.

The pair gained in line with gold early in the week, seeing a slight cool-off as U.S. stocks also lay in wait for potential Fed catalysts.

Fed Chair Jerome Powell was due to speak at a central bank conference on the day, with bulls hoping for a more dovish tone in the wake of several months of declining inflation.

The latest Consumer Price Index (CPI) data covering December, 2022, was nonetheless not due until Jan. 12.

“Probably sweep towards $17.1K before another bounce towards $17.5K for bearish divergence or we long at $16.9K. Good volatility. Lots of dips on altcoins too.”

“Think we could be establishing a new range between 17k and 17.6k for the next couple days,” part of an update confirmed.

Elsewhere, there was no sign of relief for the U.S. dollar, as strength continued to deteriorate in a potential boost for crypto. The U.S. dollar index (DXY) threatened to challenge 103 as support for a second day running.

More conspicuous than the modest uptick in BTC spot price was that of the largest Bitcoin institutional investment vehicle.

Related: Why is the crypto market up today?

In so doing, the GBTC discount to net asset value — spot BTC — narrowed to its smallest in several months.