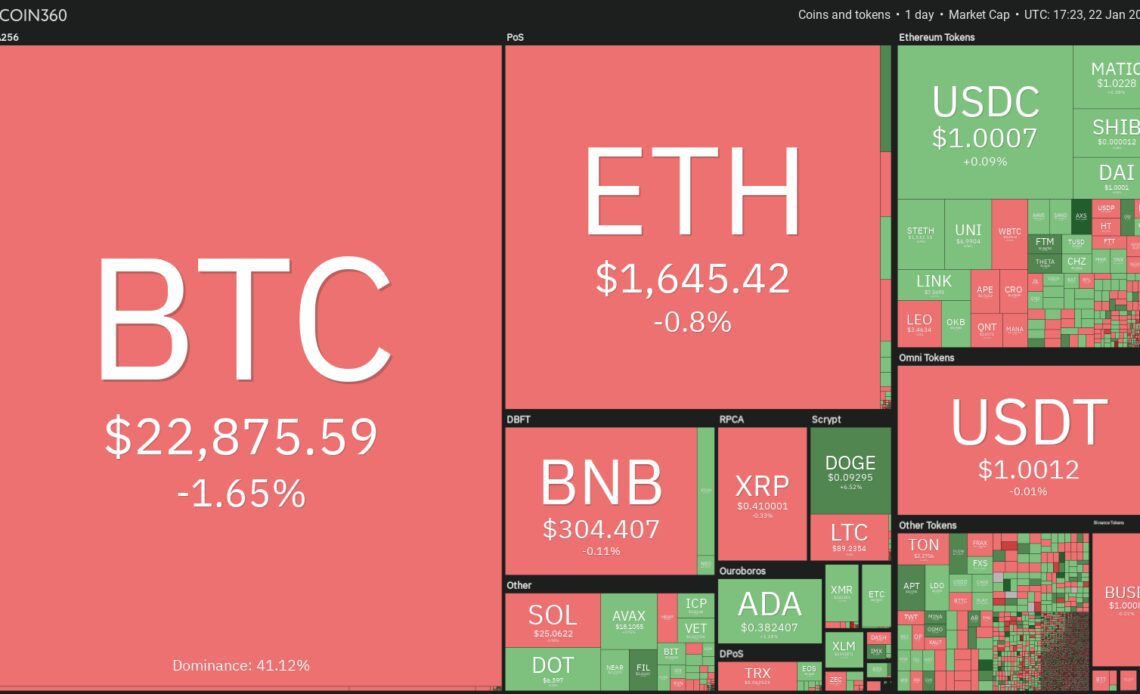 After nearly a 20% rally last week, Bitcoin (BTC) is on track to end this week with gains of roughly 10%. Bitcoin’s rally has improved sentiment and attracted buying in several altcoins. This sent the total crypto market capitalization firmly above the $1 trillion mark.

The strong recovery in Bitcoin has startled several analysts who remain skeptical about the rally. Some believe that the current rise is a dead cat bounce that will reverse direction sharply while others see similarities between the current rally and the 2018 bear market recovery.

Although traders should be ready for any eventuality, the pace of the rise in Bitcoin does point to a possible major bottom. There are likely to be bumps down the road but the dips are likely to be aggressively purchased by traders.

Let’s study the charts of Bitcoin and select altcoins that are showing strength in the near term.

Bitcoin climbed above the $21,650 overhead resistance on Jan. 20, indicating the resumption of the up-move. This shows that demand remains strong at higher levels.

The bulls pushed the price above the $22,800 resistance on Jan. 21 but failed to build upon the breakout as seen from the long wick on the day’s candlestick.

While the upsloping moving averages indicate that bulls are in command, the relative strength index (RSI) in the overbought territory warrants caution. It suggests that a few days of consolidation or minor correction is possible.

However, when a new uptrend starts, the RSI sometimes tends to remain in the overbought zone and frustrates the bears. If that happens, the uptrend may continue without a major pullback and the pair could reach $25,211.

On the downside, the first support is at $21,480. If the price rebounds off this level, it will suggest that the bulls are buying on every minor dip. That could increase the likelihood of a rally to $25,211.

The 4-hour chart shows that the bulls are trying to flip the $22,800 level into support. If the price continues higher and soars above $23,271, the bullish momentum could pick up and the pair may rush toward $25,211.

If the price turns down and breaks below $22,600, the pair could slide to the 20-exponential moving average. This level may act as a support but if bears manage to pull the price below it, the next stop…