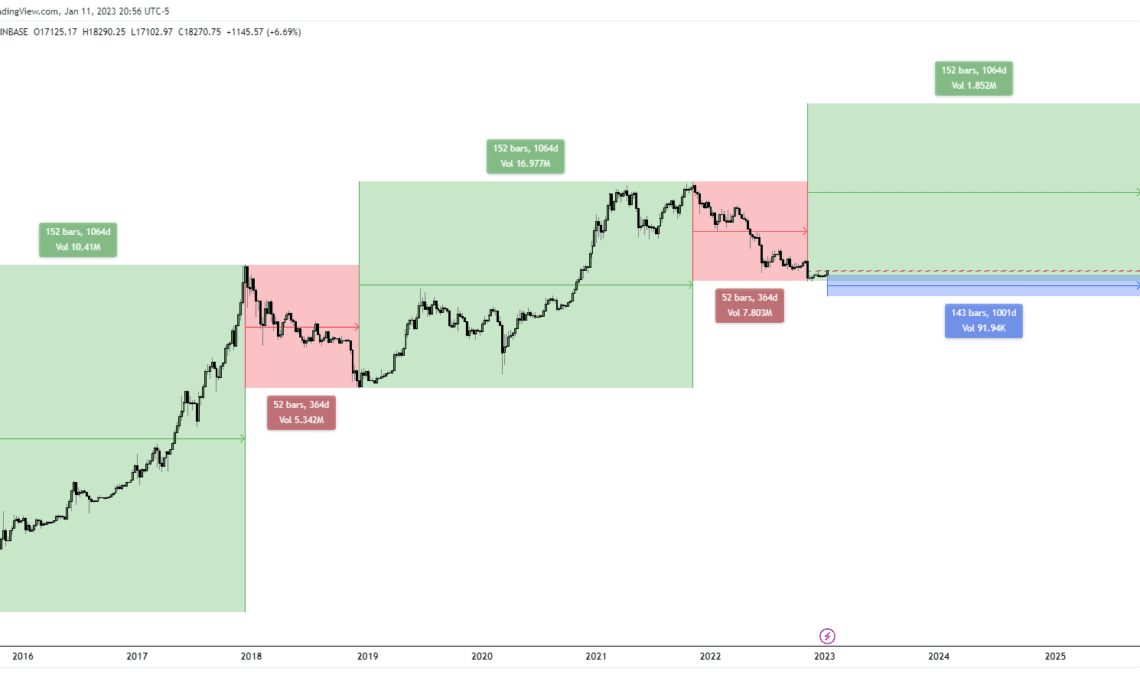 Bitcoin’s (BTC) price has followed a four-year cycle with consecutive bull and bear trends occuring in somewhat measurable intervals. A closer look at Bitcoin’s long-term price action reveals that the run-up to the top and bottom of the previous cycles look remarkably similar. What’s more interesting is that the 2020 to to2021 cycle shows signs of following the same pattern.

Independent market analyst, HornHarris, found that the period between the bottom-to-top and top-to-bottom has been the same since 2015, 152 weeks and 52 weeks, respectively.

Even in 2013, the bear market lasted 58 weeks, only six weeks difference from the other two cycles

Another resemblance with the last bottom formation is the similarity between Bitcoin’s current uptrend and the one in 2019, when the primary catalyst was a prevalent negative investor sentiment. Bitcoin price gained nearly 350% from the bottom of $3,125 and it didn’t drop below this level moving forward, marking the previous cycle’s bottom.

Four years later, the conditions have changed, but the underlying reason for the latest 30% surge in Bitcoin’s price was still the market expecting lower prices due to macroeconomic headwinds. The lack of positive sentiment and build-up of short positions in the futures market may have allowed buyers to stage a disbelief rally to hunt short-order liquidations and incite FOMO among investors who had been sitting on the sidelines.

But not all conditions are the same. Previously, the BTC whales,addresses holding more than 1,000 BTC,went on a buying spree as Bitcoin’s price started to bottom out. However, these buyers haven’t participated in the recent rally, raising concerns about its sustainability.

If history repeats itself, Bitcoin’s November 2022 lows of around $15,500 will mark the bottom of the current cycle. It would also mean that a new bullish cycle has begun, and the asset could record a new peak in October 2025.

It will be interesting to see if whale buyers buy the theory of the Federal Reserve under Jerome Powell pulling off a successful soft-landing instead of a recession as a result of their flight against inflation. December’s economic data in consumer price inflation and employment numbers showed early signs of macro improvement. A few other on-chain indicators could help confirm whether this bull run is the real…