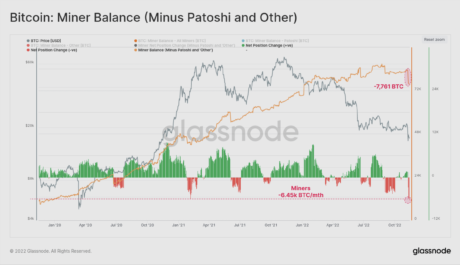 Bitcoin miners are usually some of the longest holders of BTC but that is usually when the bull market is in full swing and they do not have to worry about cash flow. Currently, the cash flow on bitcoin miners has plummeted and as the price of the digital asset continues to trend low, bitcoin miners have been put in a tight spot. In response, the miners have taken to dumping their coins in order to keep their operations going.

Since the crypto winter first began following the Terra Network collapse in May, Bitcoin miners have increasingly turned to sell off their BTC holdings in order to survive. Over the last couple of months, the amount of BTC miners having to sell has been increasing.

With the most recent crypto market decline, miners have reportedly offloaded more than 7,700 BTC in a 7-day period, according to a Glassnode report. This translates to the highest dump by miners in a 4-year period, leading to a sharp decline in their balances. In total, there was 7,761 BTC sold by these miners. Miner BTC balances were down by 10% in this 7-day period, and this brings their balances to close to a one-year low.

The chart shows that the sharp decline is correlated with the decline in bitcoin prices. So miners are continuing to follow historical trends, where they hold when the price is on the mend and sell off their coins during periods of low prices.

Why Bitcoin Miners Are Selling

The decline in bitcoin price is the primary reason behind the sell-offs being carried out by these miners. Not only do low BTC prices affect the profit margins of their mining machines, but it also affects investor sentiment during this time.

Since investors are still very wary of investing in crypto, the shares of bitcoin mining companies have plummeted significantly. This means mining companies are having to turn to their BTC reserves in order to have enough cash flow for their businesses.

Miners are also likely to continue selling BTC given that the market has not given any indication of hitting a bottom yet. If prices go lower, more miners will have to sell to realize some cash flow. In the meantime, these miners are putting more supply into a market that does not have enough demand to soak it up. Given this, the price of bitcoin is likely to continue its decline as the FTX…