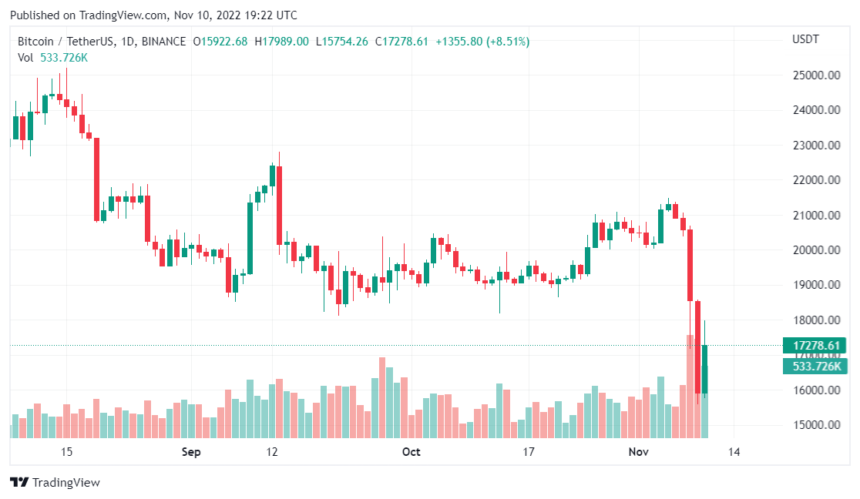 The crypto market and Bitcoin trend over the past few days have been entirely unexpected. The market is feeling the heat from the bears as most of the crypto assets took to the south. Moreover, the FTX crisis has increasingly brought a different contagious negative performance in the space.

Bitcoin had a complicated swing as the token dropped from its critical level of $20K. The price of BTC has dipped to around $16K region. The entire situation and unfolding of events are creating more fear and doubts for most participants in the crypto industry.

However, the primary crypto asset has shown signs of revival during some minutes in today’s trading hours. The US Bureau of Labor Statistics has just released the latest report on the inflation rate in the country. Unfortunately, the data for the Consumer Price Index for October is out.

According to the data, CPI for October reads 7.7%, indicating an increase of 0.4% through its seasonal adjustment. This latest report proves to be better than expected. Hence, Bitcoin reacted positively within some minutes after the news was out.

Due to the current flow in the general economy, most expectations for the CPI report were around 8%. But the reality of the value has brought a positive change in the crypto market.

Compared with the September CPI data of 8.2%, this latest CPI report proves excellent news. The core CPI data rose by 0.3% without food and energy in October. This trend is slower than the expected 0.5%, a drop from 0.6% in September.

The yearly comparison shows that the core CPI surged by 6.3% in October, below the expected 6.5% rise and dropping from 6.6% in September.

The CPI reports are one of the measures the US Federal Reserve uses to determine the inflation rate in the country. Therefore, this October’s data is an essential report for the Fed before the usual Federal Open Market Committee (FMOC).

The year’s next and final FOMC meeting has been slated on December 14-15. The FOMC will likely hike its benchmark for Fed Funds rate again at the meeting. If it happens, it will mark the 7th time such a rate increase occurred in 2022.

The Fed has been taking a hawkish stance in…