As the merge approaches, on-chain data suggests ETH used as store of value 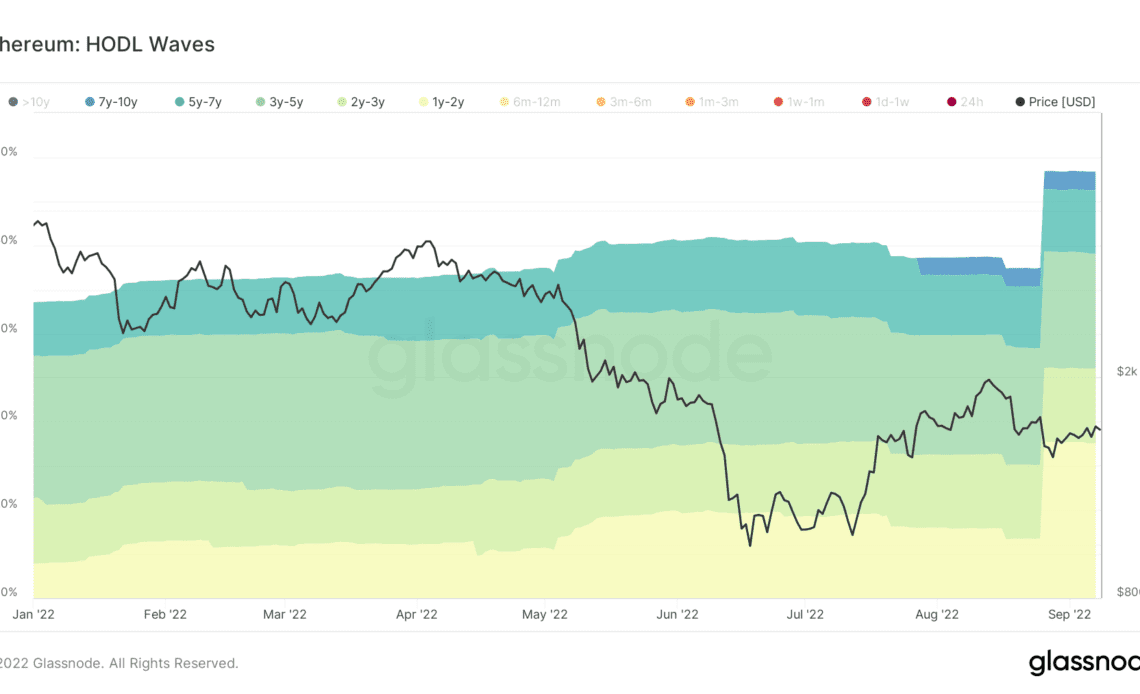 According to on-chain data, as the merge approaches, the dominant behavior across the Ethereum network is to HODL. Coins held by Ethereum investors are maturing to showcase a higher number of HODLers unwilling to sell.Within the Ethereum ecosystem, just under 60% of investors have held for more than one year, compared with Bitcoin, which has 80% of HODLers holding for the same period of time.

However, we are now seeing 7-year holders (dark blue) of Ethereum start to increase. From July 28, the first 7-year holders began to show and now hold over 2% of the supply.

Given that Ethereum mined its first block in July 2015, coins that haven’t moved in 7-years are likely genesis coins that have never moved. As time goes on, it is expected that the 7-year HODLers will continue to grow as HODLers who entered the Ethereum ecosystem during the 2017 bull run start to emerge.

Unlike Bitcoin, Ethereum is not often referred to as a store of value. However, on-chain data suggests that 2% of Ethereum holders believe it could be. Depending on the activity of the network, Ethereum may also be deflationary after The Merge, which adds credence to this theory.

Bitcoin has an in-built inflation rate of 1.7%, whereas Ethereum could see deflation of 4%, almost 6% lower than Bitcoin. Yet, Ethereum has robust utility across its network, so a lack of available ETH due to investors holding could impact the network’s performance.

Inflation is a tool designed to encourage spending. If Ethereum becomes deflationary, there will be little incentive to transact on the network.

Further, almost 32m ETH was sitting on exchanges in mid-2020. However, two years later, the amount of ETH dropped to just 20m. The number of long-term HODLers, inflation rates, and supply on exchanges are significant long-term trends required to understand supply/demand dynamics