Arbitrum Doesn’t Have a Token, But You Can Still Long It. Here’s How 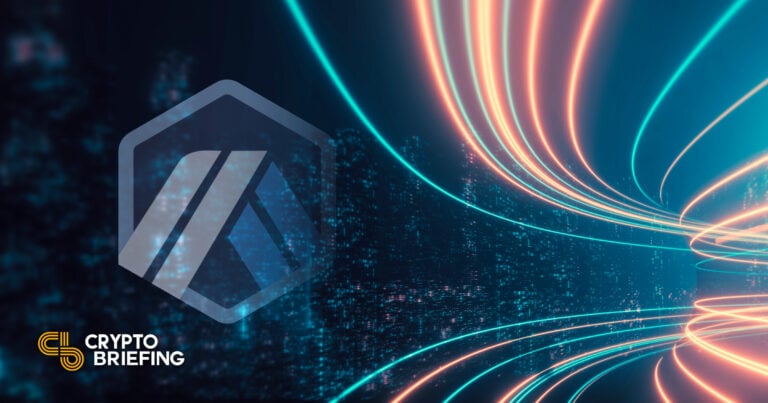 Arbitrum’s Nitro upgrade has led to increased activity on the Ethereum Layer 2 solution.
While Arbitrum doesn’t have its own token yet, two of its native protocols may serve as substitutes for traders looking for exposure.
GMX is a decentralized futures exchange, and Dopex a decentralized options exchange. Their governance tokens of both accrue fees generated by the protocols.

GMX and Dopex, two of the top protocols on Arbitrum, may provide opportunities for traders to gain exposure to the Layer 2 solution while waiting for any native token it may one day release.

Arbitrum’s Nitro launch was a success, on-chain metrics seem to indicate. Daily transactions have surged to new all-time highs (breaking their September 2021 and July 2022 records and clocking in 318,777 transactions yesterday), new addresses are being created at around three times the pace as before the upgrade, and the Layer 2 solution is clocking in about twice as much in daily fees as its competitor Optimism.

Arbitrum currently does not have a native token. However, market participants may pursue two avenues to gain exposure to the network’s growth: GMX and Dopex.

GMX is a decentralized perpetual futures exchange that enables its users to trade in a permissionless manner with up to 30x leverage. The platform is native to Arbitrum and is already generating around $400,000 in daily fees on average, which makes it one of the crypto protocols with the highest revenues behind Ethereum, Binance Smart Chain, Aave, Uniswap, and Synthetix.

The protocol has two tokens, GMX and GLP. GMX is the exchange’s utility and governance token, and GLP is its liquidity provision token. GMX accrues 30% of the fees generated from the protocol. The token price has reached a new high of about $50.2 since Arbitrum’s Nitro upgrade; it had previously reached a low of approximately $12.3 in early June.

GLP, on the other hand, accrues 70% of the fees generated from the trading protocol and is currently priced at $0.91. GLP is automatically staked upon purchase, meaning it is only obtainable on the GMX protocol itself. While the token gives higher rewards than GMX, GLP holders act as the counterparty to the leveraged traders on the exchange; therefore, GLP token performance depends on market conditions and trader execution.

As the GMX exchange is one of the largest native applications on Arbitrum itself, the GMX and GLP tokens may serve as proxies for exposure to Arbitrum network growth. The GMX token especially has proven sensitive to previous Arbitrum updates. On the day of the Nitro launch, the coin climbed from $44 to $51—but when Arbitrum’s Odyssey was temporarily postponed, it dropped from $18.7 to $15.2.

Dopex is a decentralized options exchange. Like GMX, the protocol uses liquidity pools to enable traders to buy or sell options contracts for digital assets in a permissionless manner. And just like GMX, Dopex has two tokens: DPX and rDPX.

DPX is the protocol’s utility and governance token. It has a fixed total supply of 500,000 tokens, with about 60% of them already in circulation and emissions set to end in early 2026. DPX is currently valued at around $419; it reached a low of approximately $113 in June. It is still 89.7% down from its previous all-time high of $4,222.

DPX also accrues fees from Dopex. The fees are generated from option purchases, swaps, and exercises; 70% of these go to Dopex liquidity providers and 15% to DPX stakers. rDPX is a multi-purpose token that can be used to boost rewards generated by fees.

Data from DeFiLlama indicates that Dopex has shrunk from $154 million in value locked in the protocol to roughly $29 million, while GMX is at more than $369 million and growing. The metric can often be unreliable, yet in this case, it indicates that Dopex currently does not enjoy the same kind of momentum as the futures exchange. The DPX token furthermore doesn’t appear as sensitive to changes in the Arbitrum ecosystem as GMX—it didn’t react to the Nitro upgrade, for example.

GMX and Dopex are not the only projects native to Arbitrum (stablecoin issuer Vesta Finance has also adopted the Layer 2 as its primary home, as have a few others). But they are the largest, the most famous, and the most innovative of the bunch: this makes their token prices likely to keep appreciating should Arbitrum growth continue.

It’s worth mentioning that Arbitrum’s competitor, Optimism, only airdropped its native token months after making its platform available for testing. Optimism’s airdrop was notable in that it heavily rewarded users who interacted with multiple facets of the ecosystem, for example, by using bridges or donating to Gitcoin. Should Arbitrum follow a similar course of action with its own token, familiarizing oneself with the Layer 2’s top protocols could possibly yield benefits.

Disclosure: At the time of writing, the author of this piece owned ETH and several other cryptocurrencies. The information contained in this article is for educational purposes only and is not financial advice.